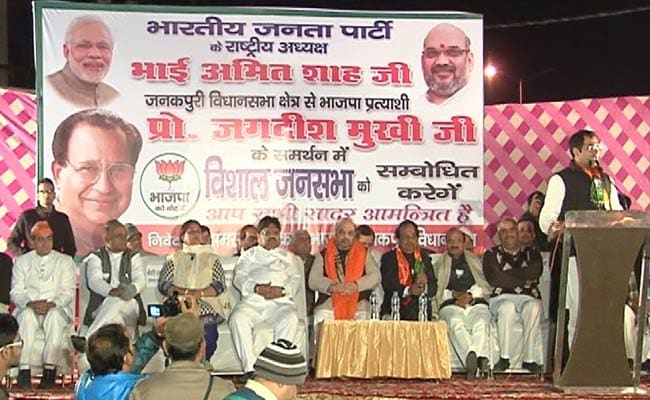 The BJP's chief ministerial candidate Kiran Bedi is missing from posters and some election speeches as the party changes the pitch of its campaign in Delhi dramatically. With seven days to go for polling, party president and chief strategist Amit Shah has deployed the BJP's biggest guns to take on Arvind Kejriwal of the Aam Aadmi Party.

While Ms Bedi - who joined the party just days ago and was immediately announced presumptive CM - continued to criss-cross Delhi with her roadshows, the party's focused attack on her main rival Arvind Kejriwal is being fronted by senior party leaders.

Tomorrow, PM Modi will address a rally at CBD Ground in East Delhi. Today, Mr Shah spoke at a rally in Janakpuri and made not a mention of Kiran Bedi. Union minister Smriti Irani addressed another rally and she too did not mention Ms Bedi.

Mr Shah told a crowd of several hundreds, "Kejriwal promised he would never take a government house or a car, he used to move around In a blue car, then in an Sx4 and so will want to park an aeroplane next to his house."

He also attacked Congress Vice President Rahul Gandhi. "Rahul asked what has changed between earlier and now as Pakistan was still firing from across the border, well how can Rahul see any difference, he's looking thought Italian spectacles" said Mr Shah.

Asked if the party's last lap strategy once again relies on the popularity of PM Modi, veteran Delhi leader Jagdish Mukhi shot back, "What is wrong with invoking Narendra Modi's name?"