Tirupati municipal commissioner PS Girisha said that since the body weighed 175 kgs, workers faced difficulty in lifting it and they had to use an earthmover to place it in a burial pit. 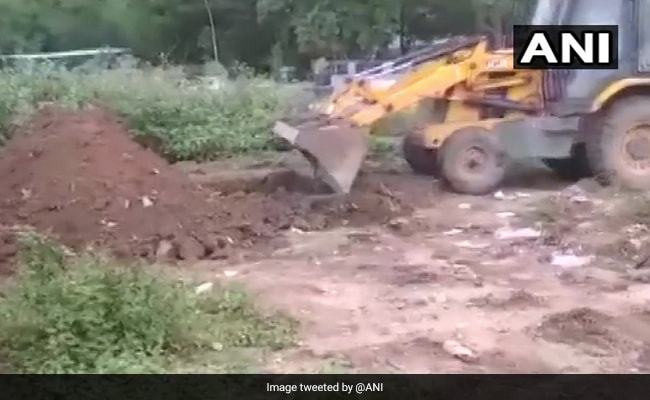 A JCB machine was used to lift and carry the body into the burial pit, the municipal commissioner said.

An earthmover was used to bury the body of a COVID-19 patient in Tirupati in Andhra Pradesh on Sunday, authorities said adding that permission was obtained from the family.

Tirupati municipal commissioner PS Girisha said that since the body weighed 175 kgs, workers faced difficulty in lifting it and they had to use an earthmover to place it in a burial pit. The action was also necessitated as the body failed to fit into the furnace for cremation.

"The workers carrying the body had to lift and move the body three or four times and they were completely exhausted as they had been accompanying the body since 5 AM. Considering the exceptional conditions, a JCB machine was used to lift and carry the body into the burial pit," the municipal commissioner said.

PS Girisha said, "Till date, 16 bodies have been cremated in Tirupati, all of them were cremated at the electrical gas furnace in ''Govinda Dhamam''. Only this body was taken to the burial ground. In fact, this body was also first taken for electric cremation but since it was so obese weighing more than 175 kg it did not fit in the electric furnace. When it was being taken back, the body fell down as the carriers could not handle it."

"Since the patient had died long ago there was much swelling of the body. We sent the body to SVIMS for keeping in the mortuary but they returned it after two more hours after which we sent it for deep burial. Our sanitary inspectors were present at the spot," the municipal commissioner said.

"For a deep burial, a 14 feet pit was dug with a JCB as it is a rocky area. The ambulance was taken two meters near the pit," Girisha said.

The commissioner said that since the burial ground was in the heart of the city if it fell down then they would have faced a bigger problem.

"In order to complete the work quickly and to avoid public contact, they did so. We have already trained how to handle it, but this is one exception. We will take care that no such incidents are repeated," he added.

Meanwhile, last month four persons were suspended in an incident, in which the body of a 70-year-old person was taken to the burial ground on a JCB earthmover in Andhra Pradesh's Srikakulam district.

Srikakulam district collector had said that that action has been taken on officials who did not follow protocol in shifting the bodies.