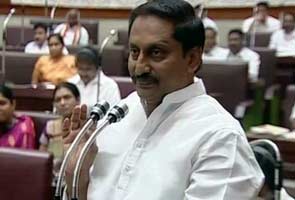 Hyderabad: Debate on a no-confidence motion against the government in Andhra Pradesh began Monday morning in the assembly but the numbers favoured the ruling Congress.

On the last day of the five-day winter session, the house took up the debate on the no-confidence motion moved by main opposition Telugu Desam Party (TDP).

Setting the tone for the debate, Leader of Opposition N. Chandrababu Naidu said the farmers in the state were in distress but the government had failed to come to their rescue.

"Our only aim is to ensure that justice is done to farmers and the farmers' agenda should become the national agenda," said the former chief minister.

The debate will continue through the day and the voting is likely to take place in the evening.

With the Praja Rajyam Party (PRP) issuing a whip to all its 18 legislators to vote against the motion, the government appears set to defeat the motion with a comfortable majority.

Majlis-e-Ittehadul Muslimeen (MIM), which has seven members, will also vote against the motion, so also an independent and a nominated member.

Congress has 153 members in the 295-member house and with seven vacancies it needs only 144 votes to defeat the motion. Even if 17 Congress rebels sailing with Y.S. Jaganmohan Reddy vote for the motion, the government is sure of bagging 162 votes.

After the intervention of Congress central leaders, PRP chief K. Chiranjeevi issued a whip to all 18 members. One of them, Shoba Nagi Reddy, a loyalist of Jagan, is likely to vote for the motion.

Chiranjeevi, who has already merged PRP with Congress, agreed to issue the whip after Congress leaders assured to protect PRP legislators' interests and accommodate them in the state cabinet and other "suitable posts".

The motion is not likely to get more than 124 votes. TDP has 87 members but one of them is not eligible to vote due to a court case. TRS has also issued whip to all its 12 members to vote for the motion. Five legislators of the Left, two of the Bharatiya Janata Party (BJP), the lone member of YSR Congress party and an independent will vote for the motion.

Though 21 Congress legislators loyal to Jagan Dec 2 attended a meeting and decided to vote against the government, but this number came down to 17 Dec 3 with Congress succeeding in winning back some legislators Congress leadership used the services of K.V. P. Ramachandra Rao, a close friend of Jagan's late father Y.S. Rajasekhara Reddy, to persuade rebels not to create problems for the government.

Promoted
Listen to the latest songs, only on JioSaavn.com
Jagan group, however, claims support of 20-25 legislators. The rebels are also ready to face bypolls in the event of being disqualified for violating party whip.

A couple of months ago, Jagan had the support of 26 Congress rebels but five of them had returned to the party fold.
Comments
Debate on no-trust motionAndhra Pradesh assembly