The TDP chief, who is sending a delegation instead, has promised to cooperate with the Jaganmohan Reddy government by playing the role of a constructive opposition leader in the state assembly. 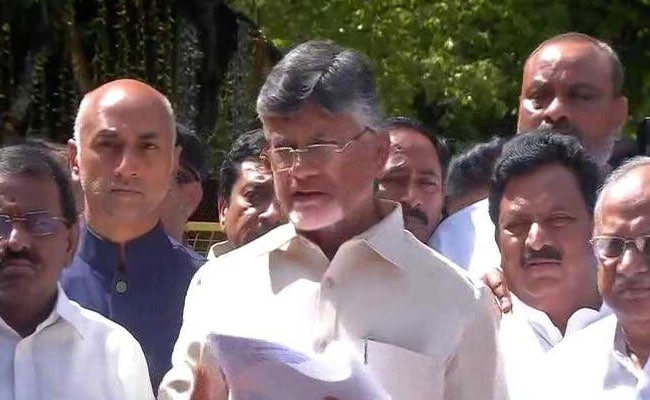 Chandrababu Naidu urged his party members to not be demoralised by the election results.

Telugu Desam Party (TDP) chief N Chandrababu Naidu has turned down an invitation by political rival YS Jaganmohan Reddy to his swearing-in ceremony in Andhra Pradesh's Vijayawada on Thursday, news agency ANI has reported. Instead, a TDP delegation comprising party leaders Atchan Naidu, P Keshav and G Srinivasa Rao will meet the Andhra Pradesh Chief Minister-elect at his Amaravati residence before the event and hand over a congratulatory letter.

Jaganmohan Reddy had invited Chandrababu Naidu on Tuesday, five days after the results of the Andhra Pradesh assembly elections showed that his YSR Congress party had swept 151 of the 175 seats in the state. Telangana Chief Minister K Chandrasekhar Rao has already confirmed his attendance of the swearing-in ceremony, scheduled for 12.23 pm.

After his victory in the assembly elections as well as the Lok Sabha polls, both of which were held simultaneously in Andhra Pradesh, Jaganmohan Reddy had taunted Chandrababu Naidu by saying that God had punished him for his "misdeeds". Accusing his political rival of "purchasing" 23 YSR Congress legislators after the 2014 elections, he said: "But now the TDP got just 23 seats and the results came on May 23. God has written a beautiful script with 23."

Jaganmohan Reddy, who is the son of late Andhra Pradesh Chief Minister YS Rajasekhara Reddy, also claimed that Chandrababu Naidu got just three Lok Sabha seats for the three YSR Congress parliamentarians he had lured back then. His party, on the other hand, won 22 of the 25 Lok Sabha constituencies in Andhra Pradesh.

Chandrababu Naidu tried to put up a brave face after his party's crushing defeat in the elections. "Do not get demoralised by what happened. Instead, follow in the footsteps of NT Rama Rao, who never lost his self-confidence even in times of electoral loss," he said at an event held in Guntur to mark the late TDP founder's 97th birth anniversary recently.

He also promised to cooperate with the Jaganmohan Reddy government by playing the role of a constructive opposition leader in the state assembly. "A new government is coming in. We have to give it some time. They promised certain things, so we should let them fulfill those promises," the outgoing Chief Minister said.