Read inOther Languages
This Article is From Oct 20, 2018

Amritsar Train Driver Says He Got All-Clear To Move On; Cops Question Him

Sources said that the driver claimed that he was given green signal and had no idea that hundreds of people were standing on the tracks when the train crossed the area. 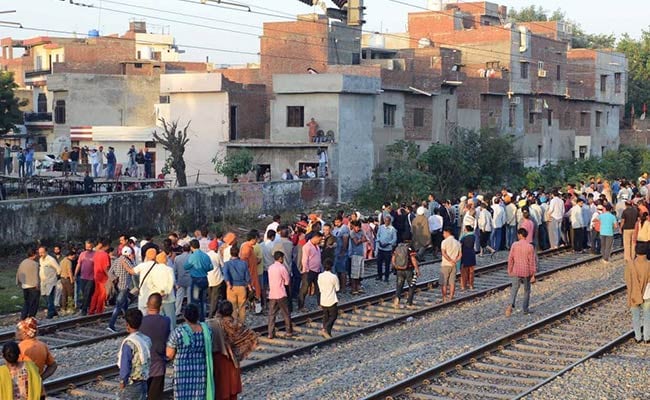 At least 60 people watching the burning of a Ravana effigy from a railway track were mowed down.

The driver of the train that ran over 60 people while they were watching Dussehra celebrations in Amritsar was questioned by the Punjab and railway police. The driver said he was given the green all-clear signal to move ahead and he had no idea that hundreds of people were standing on the tracks ahead before the train crossed the area, people with direct knowledge of the matter said.

The driver of the diesel multiple unit or DMU train is being questioned at Ludhiana railway station.

The police said the organisers of the Ravan effigy-burning event at Amritsar's Jora Pathak near the railway tracks are untraceable.

Railway officials said they are speaking with linemen posted along the tracks near Jora Phatak, who allegedly did not inform the DMU driver about the presence of hundreds of people on the railway tracks.

As the effigies went up in flames with amid the deafening noise of bursting firecrackers, the people standing on the railway tracks did not realise that a speeding train was approaching.

At least 60 people, many of them watching the burning effigies or recording the event on their mobile phones, were run over by the fast-moving train. The train passed the area within seconds.

Minister of State for Railways Manoj Sinha visited the accident site on Friday night. He said the accident is being investigated.

The railway authorities in Punjab and New Delhi said they were not informed about the Dussehra event near the railway tracks, and the police also did not prevent the people from coming to the tracks.