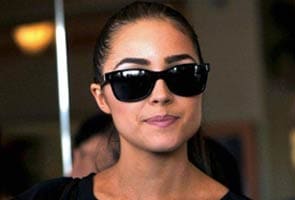 Agra: Miss Universe Olivia Culpo, who is on 10-day visit to India, has allegedly violated rules at the Taj Mahal last evening by advertising a brand of footwear during a photo session.

The local ASI authorities are looking into a complaint against the party accompanying Ms Culpo during her visit to Taj Mahal. She visited the historic monument with fashion designer Sanjana Jon and others.

According to the complaint, as the party came beside the central marble tank, sandals of a particular brand were taken out of the bag by someone in the group.

Culpo donned one of the sandals and held another in her hand, reportedly to advertise them while cameramen accompanying her shot the scene with the Taj in the background, it claimed.

According to a Supreme Court directive, any kind of commercial activity is prohibited in the premises of
archaeologically protected monuments.

The complaint said that neither the tourism police nor the Central Industrial Security Force (CISF) that is
responsible for the security of the monument stopped the party from doing the act, ASI officials said.

However, ASI's Conservative Assistant, Syed Muuzzar Ali said he was on leave yesterday and came to know about the incident only in the evening.

He said, initial reports suggest that there has been some lapse on part of the CISF and the tourism police and the matter is being probed.

Promoted
Listen to the latest songs, only on JioSaavn.com
Miss Universe is in India to promote issues such as celebrating the girl child, women empowerment and AIDS awareness across the country.