"World's Smallest Computer" Is Here. It Is Smaller Than A Rice Grain 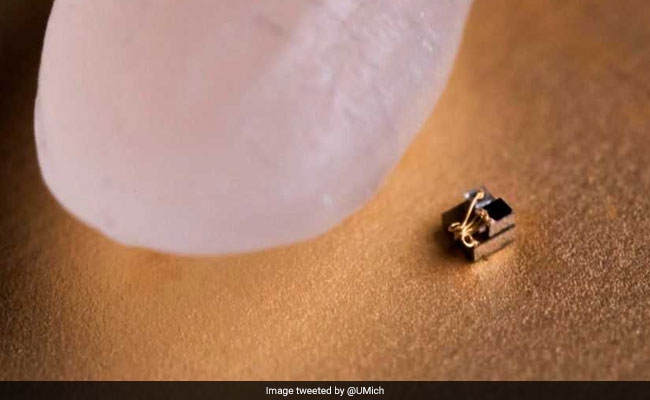 The device measures just 0.3 mm to a side and is completely dwarfed by a grain of rice.

Washington: Researchers at the University of Michigan in the US have come out with the world's "smallest computer" -- a device measuring just 0.3 mm to a side, completely dwarfed by a grain of rice.

Unlike traditional desktops that retain their program and data with or without a power back-up, these new microdevices lose all prior programming and data as soon as they are switched off, Xinhua news agency reported.

"We are not sure if they should be called computers or not. It's more of a matter of opinion whether they have the minimum functionality required," said David Blaauw, a professor of electrical and computer engineering, who led the development of the new system.

As the Motes are too small to have conventional radio antennae, they receive and transmit data with visible light. A base station provides light for power and programming, and it receives the data.

Designed as a precision temperature sensor, the new device converts temperatures into time intervals, defined with electronic pulses. The intervals are measured on-chip against a steady time interval sent by the base station and then converted into a temperature.

As a result, the computer can report temperatures in minuscule regions, such as a cluster of cells, with an error of about 0.1 degree Celsius.

The system is very flexible and could be reimagined for a variety of purposes.

The device can help in oncology research. "Since the temperature sensor is small and biocompatible, we can implant it into a mouse where cancer cells are growing," said Gary Luker, a UM professor of radiology and biomedical engineering.

Promoted
Listen to the latest songs, only on JioSaavn.com
"We are using this temperature sensor to investigate variations in temperature within a tumour versus normal tissue and if we can use changes in temperature to determine success or failure of therapy."

The study was presented on Thursday at the 2018 Symposia on VLSI Technology and Circuits.

"Got What It Wanted": Turkey Agrees To Back Sweden, Finland's Bid To Join NATO