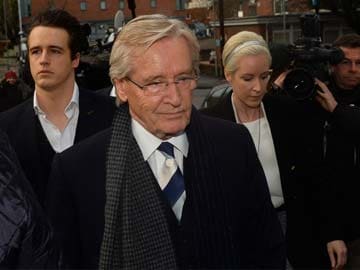 Roache, 81, who has played Ken Barlow in "Coronation Street" since the first episode in 1960, used his fame to carry out the assaults and silence his victims, the prosecution alleged.

Roache denies five counts of indecent assault and two counts of rape involving five girls aged between 11 or 12 and 16. The offences are said to have occurred between 1965 and 1971.

Prosecutor Anne White opened the case against him at Preston Crown Court in northwest England.

She said the jury members were "bound to know" the defendant was a household name.

"You may well conclude by the end of this trial that William Roache's fame and popularity provided not only the opportunity for his offending but that it is one of the predominant reasons for his victims' decades of silence," she told them.

"Favour or condemn him on the evidence, not because he plays Ken Barlow."

Two of the alleged victims are sisters, but otherwise women who do not know each other were complaining about his behaviour from the same time period, she said.

"He did not attempt to kiss her or sweet-talk her in any way," the prosecutor said.

"She describes it being uncomfortable and feeling panic-stricken."

She was allegedly raped a second time against a wall in the same house, the court heard.

In 1965, one 14-year-old visiting a television studio was led to a toilet where he made her commit a sex act on him, while another alleged victim was fondled in a toilet in an "unceremonious sexual act", said White.

He gave one alleged victim a lift in his car and made her commit a sex act on him, before giving her half a crown ($0.20, 15 euro cents) for a bus fare home.

Promoted
Listen to the latest songs, only on JioSaavn.com
The trial is scheduled to last up to four weeks.

Guinness World Records lists Roache as the longest-serving soap actor in the world.