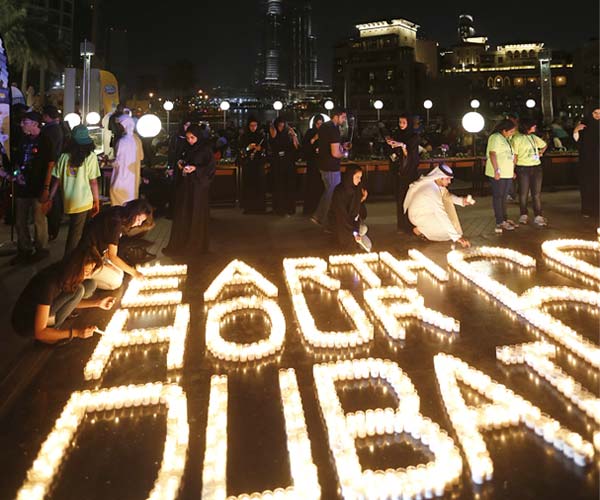 Sydney: Iconic landmarks and skylines were plunged into darkness on Saturday as the "Earth Hour" switch-off of lights around the world got under way to raise awareness of climate change.

Sydney kicked off the event at 8.30 pm (0930 GMT), cutting lights to cheers and applause from a small crowd who had gathered to see the skyline dim and Sydney Opera House turn a deep green to symbolise renewable energy.

Organisers expect hundreds of millions of people across more than 150 countries to turn off their lights for 60 minutes on Saturday night - at 8:30 pm local time - in a symbolic show of support for the planet.

"It's been a very inspiring night because it's all about hope and change."

Japan switched off soon after Australia, with the illumination on the landmark Tokyo Tower dimming down as visitors were given the chance to pedal bicycles to generate power to illuminate an egg-shaped artwork.

In the Chinese capital Beijing, lights were shut off at the former Olympic stadium, the "Bird's Nest", while in the commercial hub of Shanghai buildings along the famed riverfront Bund took part.

Some hotel guests in the city's financial district were asked to respect the event and turn off lights in their rooms for an hour.

Hong Kong's iconic skyline appeared to vanish into the night as the neon lights and advertising hoardings that usually brighten the sky were turned off, leaving the harbour in darkness.

In Singapore a crowd of almost 1,000 people watched from a floating platform as landmarks on the skyline dimmed, before a pulsating musical performance had people dancing in the dark ahead of a film screening.

India's capital New Delhi switched off floodlights at some of its iconic monuments including Qutab Minar, Humayun's Tomb and the sprawling Red Fort.

Many more of the world's most iconic attractions, including the Empire State Building in New York, the Kremlin in Moscow and Paris' Eiffel Tower are due to take part later.

While more than 150 countries joined in last year's event, the movement has spread even further afield this year, with Palestine, Tunisia, Suriname and Rwanda among a host of newcomers pledging to take part.

Earth Hour originated in Sydney with a simple appeal to people and businesses to turn off their lights for an hour to raise awareness about carbon pollution.

"What started as an event in Sydney in 2007 with two million people has now become a tradition across the country and across the world," said Dermot O'Gorman, head of WWF-Australia.

"It's now an organic, people-powered movement... which is fantastic."

Other newcomers to be plunged into darkness include Copenhagen's Little Mermaid, the statue of David in Florence and Cape Town's Table Mountain.

"I think the power of Earth Hour is in its ability to connect people and connect them on an issue that they really care about which is the environment," said O'Gorman as the city stood in darkness.

"Earth Hour shows that there are millions of people around the world who also want to do something."

Promoted
Listen to the latest songs, only on JioSaavn.com
With restaurant diners eating by candlelight, Outback communities going dark and iconic buildings standing in shadows, O'Gorman believes Earth Hour has played a part in drawing attention to energy use.

"Earth Hour has always been about empowering people to realise that everybody has the power to change the world in which they live, and thousands of people switching to renewable energy is a perfect example," he said.