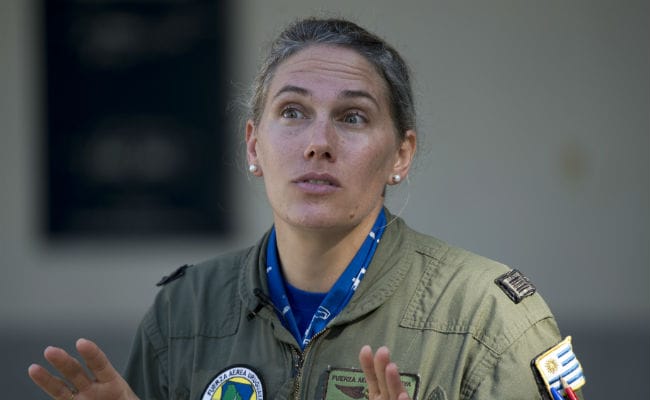 Today, there is no need to cut her hair short, as rules and attitudes toward women in the military have improved with a greater number of females in military ranks throughout Latin America.

Etcheverry is a pioneer - she is the first female to become the commander of an air force squadron with 16 men under her command, a rare seniority in a region where only four percent of military personnel are female.

In 2002, she became the first female combat pilot in Latin America's southern cone, flying an A-37 Dragonfly attack aircraft.

When she enrolled at the aeronautic academy in 1997, the first year women were allowed in the army, she was one of only two females at the school.

She said she and colleague Carolina Arevalo were inadvertent guinea pigs -- the first women in an institution that was not fully prepared to handle the new presence of females.

"In the beginning, they cut our hair, per the regulations (that were in place for men), that said hair could not reach the collar of our uniform," said Etcheverry.

"Then they let us grow it, as perceptions changed. It was like that with everything," she added, wearing her hair short again after years of growing it out, deciding that a cropped cut is more convenient.

Etcheverry has been blazing the trail in Uruguay since she started out in the military college.

But despite the example she has set, Etcheverry remains an exception in the region, where many countries only began opening their ranks to women in the late 1990s.

A few countries, notably Venezuela and Bolivia, allowed women in military academies as early as 1970.

Things are starting to change, but at a gradual pace, and the number of female military personnel varies from country to country.

Argentina, Chile, the Dominican Republic, Uruguay and Venezuela are the leaders, with women accounting for 16 to 18 percent of all military personnel, according to the Latin American Security and Defense Network (Resdal).

That is higher than in the United States, where 15 percent of military personnel - combattant and non-combattant - are women.

Argentina, Bolivia, Colombia, Ecuador, Paraguay, Uruguay and Venezuela have all had women in the top defense post over the past 15 years. Michelle Bachelet, Chile's first female president, served as her country's defense minister between 2002 and 2004.

"The issue is still not settled, but things have changed a lot," Kussrow said, making note of women in senior roles, like Etcheverry, who command units.

"The idea is not just to fill quotas but to see (what's happening) within army ranks."

Impressive gain have been made elsewhere. In Bolivia this year, Gina Reque Teran -- the daughter of the man who led the capture of Argentine guerrilla Ernesto "Che" Guevara in 1967 -- became the first woman to become a brigadier general, the highest army rank in the country.

For women in army ranks, the issue of gender balance in the military is a source of humor and pride -- and also sadness.

Etcheverry, who is married with one child, remembers an early encounter with male colleagues.

"They brought a make-up artist in to give us a lesson... At the end of the course, I was all done up like I was ready for a night out. They ordered me to stay that way," she said.

"It was ridiculous, like they didn't know what to do with us!" she recalls with a laugh.

But Etcheverry, who is used to being questioned about being a woman in a man's world, said not all memories are as light-hearted.

"At times, there was discrimination, not with words, but mostly through people's actions. You had to prove yourself," she said.

Today, 15 years after her graduation from military college, 16 percent of senior positions in Uruguay's air force are female, but there are no more than 10 female military pilots in the country.

Still, Etcheverry recognizes that her accomplishments have pushed doors open for others like her who may face less discrimination than she did when she entered the army.