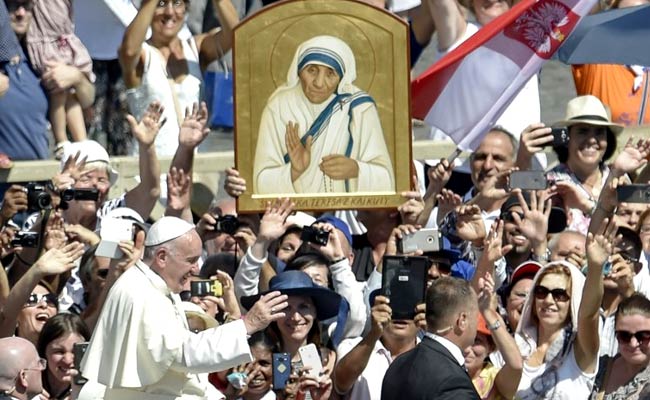 Mother Teresa was acclaimed for her work for the poorest of the poor in the slums of Kolkata.

Saint Teresa of Calcutta: Just 19 years after her death, Mother Teresa, Nobel laureate and the messiah of the poor, was formally canonized thus by Pope Francis at Vatican city today.

"We may have some difficulty in calling her 'Saint' Teresa," Pope Francis said. "Her holiness is so near to us, so tender and so fruitful that we continue to spontaneously call her Mother," he said hailing her as the personification of maternal love.

The founder of the Missionaries of Charity, who brought dignity to the thousands dying on the streets of Calcutta, was honoured at the mid-morning ceremony in front of St Peter's Basilica, which was attended by the more than 100,000 people.

It was Pope John Paul II, who met her often, had put her on a fast track to canonisation two years after her death instead of the usual five.

Today, Pope Francis completed the process at a huge mass, followed by a declaration in Latin: "For the honour of the Blessed Trinity... we declare and define Blessed Teresa of Calcutta (Kolkata) to be a Saint and we enroll her among the Saints, decreeing that she is to be venerated as such by the whole Church".

Mother Teresa's legacy complements Pope Francis's vision of a humble church that strives to serve the poor, and the festivities are a highlight of his Holy Year of Mercy, which runs until November 8.

Pilgrims had been streaming into St. Peter's Square from early morning to grab a vantage point for the service. In from them, the basilica decked out with a canvas of the late nun in her trademark blue-hemmed white robes.

Millions of Catholics revere Mother Teresa as a model of compassion.

"Everything she did gave an example to the entire world," said 17-year-old student Massimiliano D'Aniello, from Grosseto, Italy, who made a musical about Mother Teresa with his friends. "She showed we can't all do everything, but little gestures made with so much love are what's important."

Mother Teresa is credited with healing an Indian tribal woman from stomach cancer in 1998 and a Brazilian man from a brain infection in 2008.

Back home in Kolkata - the world headquarters of the Missionaries of Charity -  a celebration was held on the occasion. Nuns from the order held prayers at the Mother's tomb, located at the Mother House in Kolkata.

People of all faiths and nationalities turned up to pay their respects. Father Moloy DCosta from the Calcutta Archdiocese, said, "Something wonderful will take place in the Vatican City today as Mother is canonised as Saint Teresa of Calcutta. She fills our heart with joy."

Promoted
Listen to the latest songs, only on JioSaavn.com
Swami Saradatmananda of Ram Krishna Mission, who also paid floral tributes to Mother Teresa, said: "Today we see how Mother had created space for her in the hearts of the world. We should emulate her service."

The canonisation will also be celebrated in Skopje, the capital of modern Macedonia where Mother Teresa was born of Albanian parents in 1910 and became a nun aged 16.