Interviews with nine current and former Chinese officials point to a shift in sentiment in favor of the sitting president, even though he has spent much of the past four years blaming Beijing for everything from U.S. trade imbalances to Covid-19. 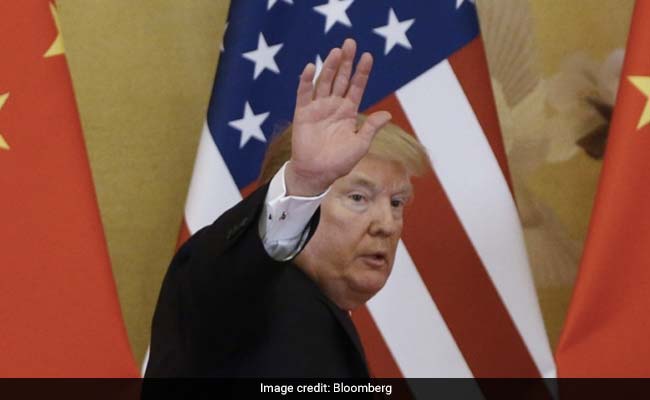 Trump has sought to capitalize on his reputation for confronting China in the election.

Donald Trump has argued frequently of late that China is rooting for Joe Biden come November's U.S. presidential election. In Beijing, however, officials have come around to support four more years of Trump.

Interviews with nine current and former Chinese officials point to a shift in sentiment in favor of the sitting president, even though he has spent much of the past four years blaming Beijing for everything from U.S. trade imbalances to Covid-19. The chief reason? A belief that the benefit of the erosion of America's postwar alliance network would outweigh any damage to China from continued trade disputes and geopolitical instability.

While the officials shared concerns that U.S.-China tensions would rise regardless of who was in the White House, they broke largely into camps of those who emphasized geopolitical gains and those who were concerned about trade ties. Biden, the former vice president, was viewed as a traditional Democrat who would seek to shore up the U.S.'s tattered multilateral relationships and tamp down trade frictions.

"If Biden is elected, I think this could be more dangerous for China, because he will work with allies to target China, whereas Trump is destroying U.S. alliances," said Zhou Xiaoming, a former Chinese trade negotiator and former deputy representative in Geneva. Four current officials echoed that sentiment, saying many in the Chinese government believed a Trump victory could help Beijing by weakening what they saw as Washington's greatest asset for checking China's widening influence.

The general assumption underlying their views was that little could be done to halt the slide in relations between the world's two biggest economies. Thus, China needed to accelerate efforts to develop high-end indigenous industries, expand into developing markets and look for opportunities to work with nations in Europe and Asia to counter any U.S. isolation efforts.

Over the course of Trump's term, the realization has taken hold in Beijing that opposition to China enjoys deep bipartisan support in an otherwise-polarized Washington. The coronavirus outbreak, which was first discovered in the country's central city of Wuhan, has only hardened American views toward Beijing.

"I don't think the election will change the relationship in a fundamental way. The deep feeling in the U.S. is that the U.S. should contain China," Zhou said. "Whether Trump wins, or Joe goes to Washington, things will get worse."

Chinese officials, eager to avoid a repeat of their surprise when Trump upset former Secretary of State Hillary Clinton in 2016, have been pressing American contacts for insights about who will win. Senior members of the American business community in Beijing say recent weeks have seen a sudden up tick in outreach from well-connected Chinese friends who in some cases haven't contacted them for years.

Although Republicans traditionally emphasized economic ties with China, Trump has moved the party in a more confrontational direction, challenging the country in virtually every area of the relationship from China's territorial claims in the South China Sea to trade, public health, human rights and technology. The Democrats have largely supported those efforts, helping to pass legislation to support Hong Kong protesters and give more military aid to Taiwan.

Even Biden, who had long backed an "engagement" strategy with China, adopted a harsher tone as the Democratic presidential primaries heated up. In recent months, Biden has described President Xi Jinping as a "thug," lauded the "extraordinary bravery" of democracy demonstrators in Hong Kong and accused China of "predatory" trade practices. He labeled the mass detention of Uighur Muslims in the far Western region of Xinjiang "unconscionable."

"Trump has destroyed a lot of goodwill," said Wang Huiyao, an adviser to China's cabinet and founder of the Center for China and Globalization. "At the start of the trade war, there were a lot of people who were pro-U.S., but they are now sympathetic to the hard-liners."

Trump has sought to capitalize on his reputation for confronting China in the election, despite his early praise for Xi's handling of the coronavirus outbreak. In April, he told Reuters that "China will do anything they can to have me lose this race," asserting without evidence that Beijing's response to the virus was focused on a desire to see him lose in November.

China's foreign ministry reiterated its longstanding position that it never seeks to interfere in the internal affairs of other nations. In a possible sign that the two sides are seeking to manage the election year disputes, U.S. Secretary of State Michael Pompeo was expected to meet top Chinese diplomat Yang Jiechi in Hawaii later Tuesday, according to two people familiar with the plans.

Some in Beijing are wondering aloud about Trump's long-term impact on U.S. stability, pointing to surging coronavirus cases, protests against police discrimination and speculation about whether the pandemic election might end in chaos. "The U.S. as we know it may no longer exist," said Gao Zhikai, a former Chinese diplomat and interpreter for Deng Xiaoping.

Trump's "America First" policies have created similar frictions in capitals that have traditionally been friendlier to the U.S., as he levies tariffs on key trading partners, presses allies for greater spending on collective defense, withdraws from multilateral agreements and supports the U.K.'s break from the Europe Union. Chinese officials privately acknowledge that a Democratic administration might prove more formidable if it worked with allies to present a united front.

Even if a Biden presidency proved more difficult for Beijing, two current Chinese officials said he might open up more areas for cooperation such as restoring U.S. participation in the Paris climate deal -- negotiated while he was vice president under then-President Barack Obama.

"He supports working on topics like climate change, WTO reform and TPP," said Wang. "There are areas where we can cooperate."

On a more personal level, some Chinese officials involved in trade negotiations with the Trump administration support a Biden victory simply so they can spend more time with their families, according to one person familiar with their thinking. China's trade team shows up towork looking exhausted, the person said.

Both sides may find it difficult to escape the pattern of confrontation no matter who wins. Huawei Technologies Co. executive Meng Wanzhou is still detained in Canada awaiting a decision on a U.S. extradition request, while Beijing's plan to impose a security law on Hong Kong has caused outrage in Congress and brought the countries' "phase one" trade deal into question.

"Nowadays in China people are becoming more and more clear about the U.S.'s objectives," said Zhou, the former Chinese representative in Geneva. "We have not yet reached the darkest hour in the relationship."