In Pakistan, School Inside A Temple Where "Salaam" Meets "Jai Shri Ram"

Anum runs a school inside the temple in the Basti Guru area of the southern port city. The school is situated in the middle of an informal Hindu settlement which is facing constant threats from land grabbers. 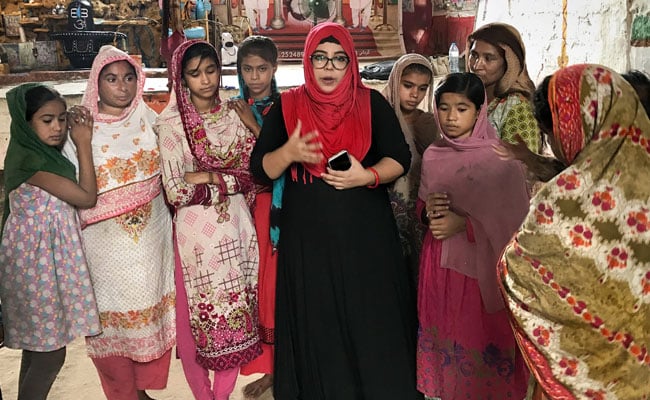 Inside the Hindu temple in Karachi, Anum Agha often holds discussions with students after her classes.

Inside a Hindu temple in a shanty area in Pakistan's Karachi city, Anum Agha wearing the traditional Muslim Hijab greets her students with salaam and gets a loud Jai Shri Ram in response.

Ms Anum runs a school inside the temple in the Basti Guru area of the southern port city. The school is situated in the middle of an informal Hindu settlement which is facing constant threats from land grabbers.

But Ms Anum is determined to impart knowledge about education, health and basic rights to the children of the minority community.

In the settlement, 80 to 90 Hindu families live in a close cluster of wooden huts and some semi-constructed houses.

One can see Ms Anum holding discussions with children of the settlement after her classes are over.

"Everyone is surprised when I tell them about our school inside this temple but we had no other place to hold our classes when I first started coming here last year," she told PTI.

The classes are conducted in the main area of the temple. The walls of the temple are plastered with posters of Hindu deities and statues of Hindu Gods placed up on a higher perch.

The lack of basic facilities is noticeable as one moves around the settlement located in Rehman Colony near Mahmoodabad but for land grabbers, it is not an ordinary piece of land.

"There have been at least two incidents in the last four years when some huts were set on fire and the Hindu families were threatened and told to get out of the area," Shiva Dharni, a community leader, said.

Recently authorities also cut electricity and water connections to the Basti, which was set up in the 60s when the Hindu families migrated from Ghotki in interior Sindh to Karachi.

The area witnessed tensions a few years ago when a Muslim resident apparently started propagating an idea that a mosque should be constructed over the land.

"These land grabbers try to persuade the Muslim clerics that having a settlement of lower caste Hindu in the center of a proper Muslim neighbourhood is unacceptable," Arif Habib, who heads the non-governmental Initiator Human Development Foundation which has brought Ms Anum to run the school in the temple, said.

"These are vulnerable communities and they are under threat from non-state actors, I mean land grabbers who want them to evacuate the plot where this settlement is located," he said.

Ms Anum reluctantly admits that some of the Muslim residents living around the settlement don't like her involvement with the scheduled caste Hindu families and her holding classes.

"But I do it because these people are not even aware of their basic rights. Their children want to gain knowledge and education. Some of them attended other schools in the area but faced social and religious issues," Ms Anum said.

She said that the Hindu elders were very happy that their children, specially the girls, don't have to leave the settlement for education.

Asked whether she has faced difficulties as a Muslim teacher, Ms Anum said she did face challenges.

"But I never talk about religion and avoid hurting their sensitivities. I try to keep them focused on different subjects and religion is not one of them," she said.

"I respect them as human beings and they respect me back. That is how we work. We celebrate religious festivals together. I say salaam to them and they respond with Jai Shri Ram."

She feels the school can serve as an example of how different communities can co-exist peacefully in the Muslim majority nation while respecting each other.