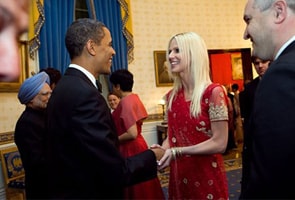 Michaele Salahi, who sauntered uninvited to the November 24 dinner with her husband Tareq and shook hands with both Obama and Manmohan Singh, has announced she plans to put the dress up for bid around the time the scandal is addressed on "The Real Housewives of DC". (Watch: DC Housewives get out the knives)

The auction proceeds will go to victims of the Haitian earthquake and people with multiple sclerosis, Salahi told a news agency.

There's no airdate yet for the reality TV show episode. Salahi is one of five women starring in the series that premieres Thursday night on Bravo.

Much of the first episode features the other four housewives criticising Salahi behind her back for being too skinny and allegedly not paying her bills, CBS said.

Salahi said watching the episode hurt for "a minute", but she got over it.

The gate-crashing incident is under criminal investigation by a federal grand jury and could still lead to prison time for Salahi and her husband.

Promoted
Listen to the latest songs, only on JioSaavn.com
"To be honest, I don't know where it's at," she said of the probe. "But our attorneys have said to go on with our lives."

"And if the president and vice president are joking about it," she added, "I think they're ready to move forward, too."