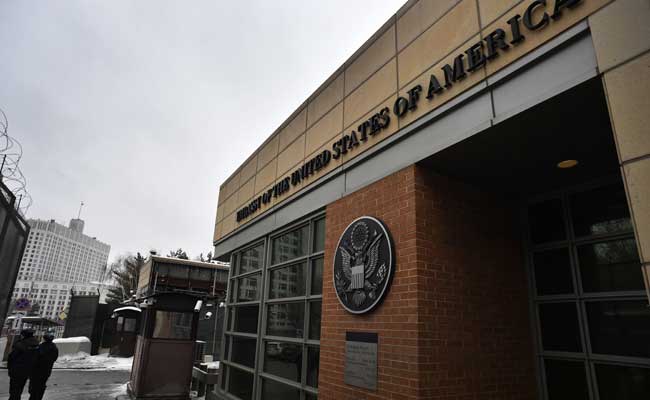 Russian policemen stand guard in front of the US Embassy in Moscow. (AFP)

In February 2001, when the street corners and sidewalks of Moscow were still piled high with dirty, gray snow, FBI agent Robert Hanssen was arrested near his Virginia home and charged with espionage, accused of passing secrets to the Russians.

His arrest made the news, as did the U.S. government's decision to expel 50 Russian diplomats from the United States in retaliation. For most Americans, the news of the expulsions was a brief blip in their day, something they heard on the radio en route to the office.

For me, it was life-shattering.

I was living in Moscow at the time, with my dog, a toddler son and my husband, a Diplomatic Security Service special agent who was assigned to the U.S. Embassy in Moscow. The Diplomatic Security Service is the law enforcement arm of the State Department, charged with threat analysis, cybersecurity and protection. As soon as we heard of the expulsions, we knew what was coming. And this week's news that Washington would expel 35 Russians in retaliation for alleged election hacking brought those memories flooding back.

Moscow was our first post in the Foreign Service. As Russian speakers with graduate degrees in Slavic literature, we mostly loved living there. (Though, as a Los Angeles native, there was no way I could learn to love Russian winters.) We spent our free days exploring the city, wandering through Gorkii Park, visiting museums and learning to make Georgian khachapuri, bread stuffed with salty cheese that Russians universally adored. We didn't have many Russian friends -- Russians didn't typically associate with American diplomats -- but within the embassy, we had a tight-knit group. And we knew that 50 of us were about to be kicked out. We just didn't know who.

One friend hoped to make the list. He was tired of living in Russia and ready to move on to a place where the work relationship was easier. He joked that he was going to make a big sign that read "I AM A SPY" and hold it up across the street from the embassy, in front of the abandoned church we called Our Lady of Perpetual Observation.

We didn't. We still had over a year left in our three-year tour, and if we were kicked out, we'd have nowhere to go. Our onward assignment had already been determined, and my husband would likely have to sit out the intervening year in an office somewhere back at headquarters, doing some job that hadn't yet been filled, probably because nobody wanted it.

Still, we knew we'd likely be booted. My husband had already run into problems with our host government, which didn't seem to like the work he and his colleagues did. So I wasn't surprised when he called from the office with the news: We'd made the list of 50, and we had to leave Russia before our diplomatic status was revoked.

I hung up the phone and looked around our tiny apartment. My son was on the floor, pushing a toy truck across the carpet while the dog kept careful watch on the cracker my son was holding in his grubby toddler fist. Everything was normal. Except it wasn't.

We swung into action immediately. Our group was split into two parts: those who had to leave within three days and those who had a few weeks to get out. Thankfully, we were in the second group. Even so, we had precious little time to pack three suitcases with everything we'd need for life in . . . wherever we were going.

My husband worked the phones, talking to people in Washington and at other embassies around the globe, trying to find a place he could land for a year. I sorted our belongings for the packers and tried to keep the toddler from destroying the piles.

The embassy travel office tried frantically to secure us places on airplanes out of Moscow before our deadline passed. The summer travel season was fast approaching, and flights were full. Then we had the added problem of the dog. Diplomats are required to "fly America," but the U.S.-based carriers refused to take our dog on their flights because temperatures might be too hot in the States when we arrived. The Russian employees of the travel agency worked the phones diligently. "Please," I heard one plead with her American counterpart, "you have to take this dog or the family cannot travel. And if they do not leave in time, they will be arrested."

Somehow it all came together. We secured a flight on the second to last day before we had to leave. We found a hotel in Virginia that could accommodate a dog, a toddler and a very stressed-out set of parents. We watched Russian movers cart our earthly possessions away, with no idea when we'd see them again. My husband even managed to secure an onward assignment to bridge the year-long gap he'd been facing, so we knew that in a few short weeks we'd be landing in Yerevan, Armenia, to start all over.

The goodbyes were quick, with families leaving on every available flight. My husband's colleagues gave him a going away gift: a framed copy of a newspaper article the Russians had printed in recent days, showing a badly doctored photograph of him and three of his colleagues, along with a story about some terrible thing they had supposedly done while in Moscow.

We were ready to go.

Years passed, and the story of that stressful time mostly became a badge of honor, a funny story to tell at dinner parties. There were times, though, when it came back to haunt us. When I became ill a few years later, I needed to be medically evacuated from our post in Kazakhstan to a hospital in London. But the small medevac plane was supposed to stop in Moscow for refueling, and it wasn't clear that the Russians would permit us to do this. I lay on a gurney in Almaty, in need of surgery and a blood transfusion, while the doctors searched for an alternate route that wouldn't go through Russia. I was eventually flown through western Kazakhstan en route to a safe procedure in Finland.

Most of the time, when you are declared persona non grata, it is a life sentence. That was the hardest part for the two of us. We were lifelong Russian scholars, and we thought we'd never be allowed to return to the country that had fascinated us both since our high school days.

Then a few years ago the top job in Moscow's regional security office came open, and Diplomatic Security decided to try to send my husband back. Almost a decade and a half had gone by since we'd been PNGed, and we hoped that since it was a retaliatory move, not triggered by anything we'd actually done, they would be ready to move on and allow us back in. By then, my husband was in Baghdad while I worked and took care of our children -- four of them now -- in neighboring Jordan. We sent our passports to the Russian Embassy in Washington, and after a long wait they came back stamped with visas.

So it happened that, 13 years after we'd been kicked out of Russia for "activities unbecoming a diplomat," we touched down again at the airport in Moscow in 2014, ready to get back to work. We spent two years there, leaving in July for my husband's new assignment. When we left, the relationship was unpleasant. I didn't have any problems, but many of my friends were harassed, pulled over and ticketed for no reason, or stopped when they tried to enter the Embassy. One woman I know was on her way to her son's swim meet when her husband was pulled over by the police, yet again. Rather than complain, she used her phone to summon a taxi. When the taxi arrived, she and her son leaped from the car and hopped into the taxi, leaving her husband by the highway to sort things out. She made it to the swim meet in time. Her husband was quite late.

What's it like, living in Moscow? people always ask me. I'm a writer, yet I tell them that it's impossible to explain life as a diplomat in Moscow. It's fascinating; it's annoying; it's confusing. It's scary, and it's hard, and I loved every minute of it. Well, that's not true. I never did learn to love the Russian winter.

Promoted
Listen to the latest songs, only on JioSaavn.com
- Donna Scaramastra Gorman is a freelance writer and the author of "Am I Going to Starve to Death?: A Survival Guide for the Foreign Service Spouse."