"We're Confident...": Trump Appears To Confirm US Nukes Are In Turkey

US government officials have long avoided disclosing or even confirming widely believed locations of US nuclear weapons. 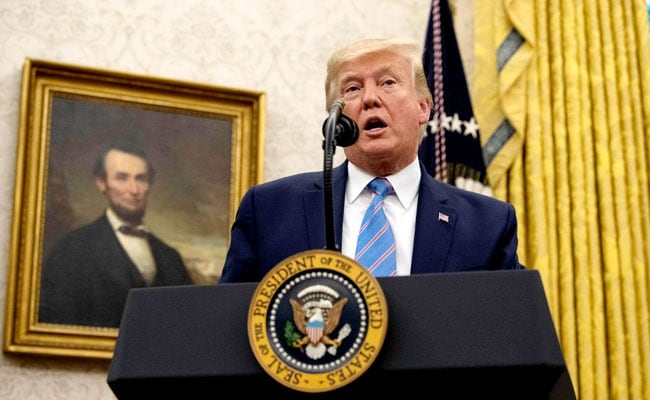 At the White House, Donald Trump was asked about the weapons' security amid the Turkey-Syria conflict

President Donald Trump has often said things he perhaps shouldn't have and repeatedly has disclosed sensitive information as president. On Wednesday, he did it again, appearing to confirm that the United States has nuclear weapons in Turkey.

At the White House, Trump was asked about those weapons' security, now that Turkey has gone against U.S. wishes by invading northern Syria after the Trump-ordered U.S. withdrawal from the region. He didn't explicitly confirm that the weapons were there, but he went along with the premise, saying that "we're confident" they'll be safe "and we have a great air base there - a very powerful air base."

"As a matter of policy, the Defense Department does not comment on the presence of nuclear weapons in Turkey or anywhere else in Europe," said Kingston Reif, the director for disarmament and threat reduction policy at the Arms Control Association.

"U.S. and NATO officials do not, as a matter of policy, confirm the existence, locations or numbers of tactical nuclear weapons deployed in Europe," said Jessica Varnum, deputy director at the Middlebury Institute of International Studies' James Martin Center for Nonproliferation Studies.

The existence of the weapons in Turkey isn't exactly a secret, though. Reif noted that "the Air Force, in its fiscal year 2015 budget request, noted the presence of 'special weapons' at 'storage sites in Belgium, Germany, Italy, the Netherlands, and Turkey."' Other experts noted that it's not easy to hide such weapons.

Last July a document published by a NATO-affiliated body, which later was deleted, appeared to confirm that nuclear weapons were being housed in those same five countries. The document from a Canadian senator for the Defense and Security Committee of the NATO Parliamentary Assembly said the U.S. nukes were in Incirlik in Turkey.

Vipin Narang, a nuclear proliferation expert at M.I.T., highlighted another issue with Trump saying that "we have a great air base there."

"Incirlik is Turkey's air base, not ours," Narang said. "And that is essentially the problem. We store these nuclear weapons in secure vaults on a Turkish air base, where we either have to secure them under the present circumstances, or bring transport aircraft to the base, move them on a Turkish air base and then fly them out of Turkish airspace if we wanted to extract them.

"Under the present circumstances, that is not a simple logistical or security feat."

The security of those weapons has been a growing concern this week. The New York Times reported that State and Energy Department officials were looking at how to evacuate the weapons from Turkey if the situation in the region deteriorates.

As an Air Force Times report this week showed, though, officials would still avoid confirming the locations, even if they seemed plainly obvious:

"In an interview this summer with Air Force Times on the future of Incirlik amid rising tensions with Turkey, former Air Force Secretary Deborah Lee James would not confirm or deny the presence of nuclear weapons there. But, hypothetically speaking, she said that if nuclear weapons did have to be removed from that base, it would be a complicated operation. It would require negotiations with the nation that would become the weapons' new host, James said. And it would require a great deal of logistical and security work.

"If the Air Force found a new nation willing to host the nukes, James said, it would have to take 'the greatest of care' in their removal and transport. If the receiving base did not have the facilities or security necessary, James said, it would require a significant construction effort. And NATO would likely be involved."

Trump in May 2017 shared highly classified information with top Russian officials in the Oval Office - information that U.S. officials worried could jeopardize a valuable intelligence source. He also reportedly told the Philippines' president in April 2017 that the United States had two nuclear submarines off the coast of the Korean Peninsula, according to the New York Times. And two months ago, Trump tweeted what appeared to be an image from a classified satellite or drone in Iran.

Presidents have broad authority to declassify whatever they want, but that doesn't mean the disclosures are necessarily beneficial for the U.S. government.