Two anchors, the station's chief meteorologist and a weatherman, stuck it out as long as they could before leaving the building as the live broadcast continued to roll. 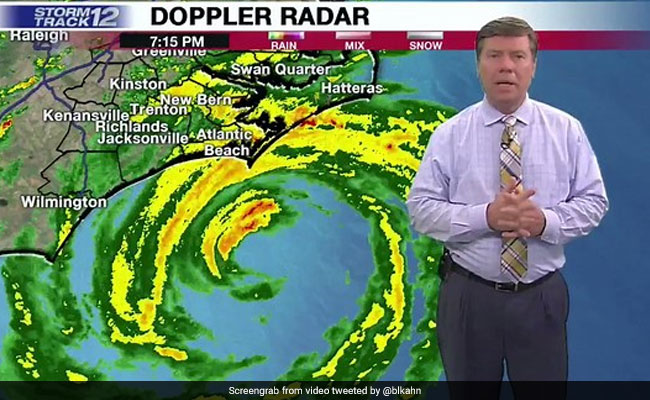 Donnie Cox later appeared by himself to tell viewers that the station was handing off its broadcast.

A local television station in North Carolina was in the middle of its nightly broadcast Thursday when two of the station's anchors, chief meteorologist Donnie Cox and weatherman Shane Hinton, gave viewers an urgent update as an image of Hurricane Florence swirled over a map behind them.

"We have a situation that has developed here, at the station, and that is that the water is getting close to the building, that the building has been evacuated," Cox said. "We are staying here to keep you up to date."

The station, WCTI, is based in New Bern. The town of 30,000 is bordered by two rivers and was hit hard by Florence. Heavy rain and winds caused water levels around the town to rise 10 feet, flooding the downtown and requiring the rescue of many residents who had not heeded the county's mandatory evacuation orders.

Ashley Pratt, another meteorologist at WCTI, tweeted a video that showed water pooling outside the station around 7 p.m.

And sometime later, Cox appeared by himself on the broadcast to tell viewers that the station was handing off its broadcast.

"Because of the rising waters, we're going to take you to the coverage of our sister station in Myrtle Beach," Cox said, before walking off the set, leaving an empty frame on the broadcast as the weather graphic continued to pulse silently.

Pictures of our station at WCTI. @Ginger_Zee@kevinselle@spann@KOCOShelby@NWSMoreheadCity@wxbrad@wcti12pic.twitter.com/4IbF01uItD

The story was first reported by the Weather Channel.

"So that really did just happen. The water started rising and we evacuated almost an entire TV station in about 15 minutes," anchor Jaime McCutcheon tweeted around 8 p.m.

The station later tweeted, "Little rough, but we're all out."

"Many have heard that we sadly had to evacuate our station last night due to the floods in New Bern," he wrote. "While [Donnie Cox] and I stayed as long as we could, we ultimately had to evacuate as well before things became unsafe. I hope we did not let you down. We truly gave it our all."

(This story has not been edited by NDTV staff and is auto-generated from a syndicated feed.)
Comments
Hurricane Florenceweatherman Shane HintonWCTI