The 3,330-meter high volcano has again roared back into action due to which the Italian authorities issued a "yellow" alert last week. 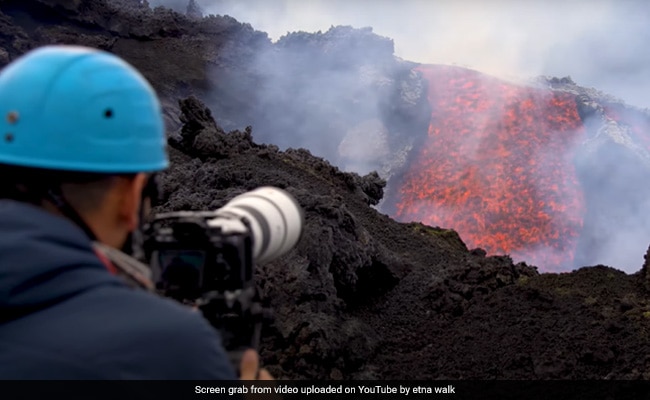 Sizzling red hot lava flowed down and smoke billowed from Mount Etna on the east coast of Sicily, Italy, in a stunning display earlier this week. On Tuesday, a camera crew travelled around 2.7kms up the volcano to its southeast crater to capture a close up of the hot lava flowing from Europe's highest and most active volcano.

The ‘Etna Walk' team got as close as one can get to the lava erupting out of the volcano. Taking to social media, the videographers shared a clip which showed the lava and plumes of smoke billowing into the sky. The lava can be seen flowing down Mount Etna, rendering an amazing display.

According to Reuters, the Etna Walk crew informed that the temperatures of the lava reached 1292-1472 degrees Fahrenheit (700-800 degrees Celsius) which is why they had to be extra careful of the high temperatures whilst getting as close as possible. They travelled to the volcano's southeast crater where most of the eruptions of the last decade have occurred.

Etna is located above the Sicilian town of Catania. It often erupts but rarely causes damage. It is believed to have the longest written record of eruptions than any other volcano, with its first recorded observation going back to 425 BC. The last major eruption occurred in 1992.

As per Reuters, in recent weeks, the 3,330-meter high volcano has again roared back into action due to which the Italian authorities issued a “yellow” alert last week.

Also Read | Water On Moon May Have Come From Ancient Volcanic Eruptions: Study

Mount Etna is believed to be a submarine volcano that emerged above sea level from solidified lava following several eruptions, space.com cited Nasa's Earth Observatory as saying. As per the American space agency, lava flowing over the mountain's surface dates back as far back as 300,000 years ago.