Kavachi volcano was dubbed a "Sharkcano" after a 2015 expedition discovered two species of sharks living within the active crater. 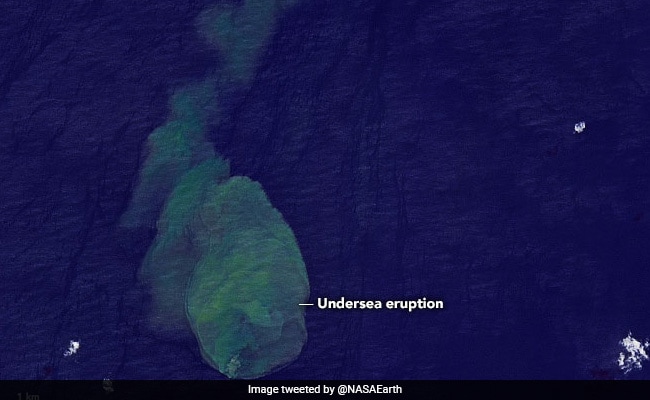 Experts believe sharks must have mutated to survive in the acidic environment.

Kavachi volcano in the Solomon Islands, which is one of the most active submarine volcanoes in the Pacific Ocean and most known for its shark inhabitants, is showing increased plumes, as per the American space agency NASA. The underwater volcano was dubbed a “Sharkcano” after a 2015 expedition discovered two species of sharks living within the active crater.

Taking to Twitter, the National Aeronautics and Space Administration (NASA) shared satellite images of the undersea volcano erupting. The pictures show a plume of discoloured water being emitted from the Kavachi Volcano, which lies about 24 kilometres south of Vangunu Island, on May 14. The images were taken by the Operational Land Imager 2 on the Landsat 9 satellite.

In 2015, scientists found hammerhead sharks living in the hot, acidic waters of Kavachi Volcano's underwater crater. The 'sharkano', as they called it, is erupting again. https://t.co/l4Exv5GZXypic.twitter.com/XS7QBHxqCw

According to NASA's Earth Observatory, Kavachi was formed by plate tectonics and it started erupting in October last year. The new satellite data suggests activity on several days in April and May 2022. Research has shown that these plumes of superheated, acidic water usually contain particulate matter, volcanic rock fragments and sulphur.

However, this is not a problem for the resident sharks as the large marine animals are able to exist in an extreme environment tolerating hot and acidic water. The US space agency informed that a scalloped hammerhead and the silky shark were among multiple fish species spotted living in the active volcano by researchers in 2015. Experts believe that the sharks must have mutated to survive in the hot and acidic environment.

Coming back to the volcano, NASA said that large eruptions were last observed at Kavachi in 2014 and 2007. But the space agency also added that it erupts nearly continuously, and residents of nearby inhabited islands often report visible steam and ash.

The first reports of its activity were recorded in 1939. Since then, there have been at least 11 significant eruptions that were so powerful that they created a new island. “But the islands, up to a kilometre long, have been eroded and washed away by wave action,” NASA said.

The summit of the volcano is currently estimated to lie 65 feet below sea level. Its base lies on the seafloor at the depth of 1.2 kilometres.

EU Drug Regulator Reviews Use Of Smallpox Vaccine Against Monkeypox