Watch Out, Mickey: Star Wars Theme Parks Are Not 'Far, Far Away' 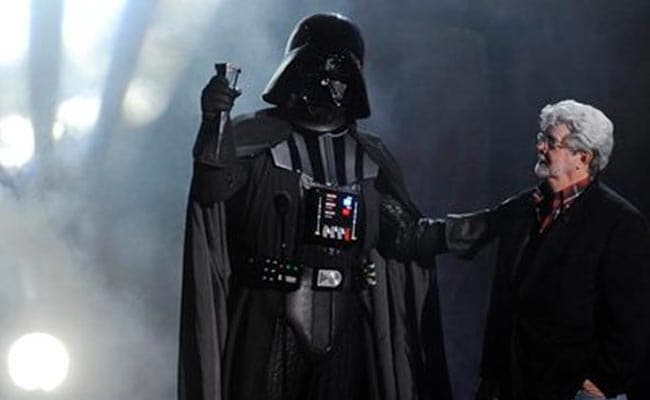 File photo of Darth Vader with his creator.

With star Harrison Ford on hand, Disney CEO Bob Iger said that after Disney's $4 billion purchase of Lucasfilm three years ago, "we wanted to bring 'Star Wars' to every corner of our company... Not only on screens but in real life."

"We are creating a jaw-dropping new world that represents our largest single-themed land expansion ever," Iger said.

"These new lands at Disneyland and Walt Disney World will transport guests to a whole new Star Wars planet, including an epic Star Wars adventure that puts you in the middle of a climactic battle between the First Order and the Resistance."

In addition to that battle experience, visitors will be able to drive "one of the most recognizable ships in the galaxy," the Millennium Falcon, on a secret mission, he said.

The 14-acre (5.6-hectare) sites will have their own staff and restaurants will be staffed by wild creatures from the space saga.

"You'll have a chance to run into all the droids and fantastic beasts," Iger added.

It's the first time the entertainment giant is trying the "Star Wars" theme at its parks.

The three-day D23 expo at the convention center in Anaheim -- home to the original Disneyland Park -- has drawn Disney fans and media representatives from around the globe.

Disney Studios chairman Alan Horn said that on the heels of his smashing success with "Jurassic World," director Colin Trevorrow would be at the helm for the upcoming "Star Wars - Episode IX." It is due out in 2019.

The cast of "Star Wars - Episode VII - The Force Awakens" -- the next chapter in the wildly popular franchise -- drew a massive round of cheering, particularly for Ford, known for playing Han Solo.

As part of its strategy to squeeze the most out of the "Star Wars" universe, Disney plans to release one film a year until 2019.

After "Episode 7" will come "Rogue One," in December 2016. It is currently filming with Gareth Edwards ("Godzilla") directing, and starring Felicity Jones, Diego Luna, Ben Mendelsohn and Forest Whitaker.

Johnny Depp wowed the crowd decked out as his popular Jack Sparrow character from "Pirates of the Caribbean."

Its next installment comes out in 2017 starring Orlando Bloom and Javier Bardem.

On the heels of "Maleficent" and "Cinderella," it is the turn of Rudyard Kipling's "Jungle Book" to shine with live actors next year.

The film was shot using cutting-edge digital technologies and has a star-studded cast.