"We stated that Ukraine will become a member, I expect allies to reiterate that position," Mr Stoltenberg said. 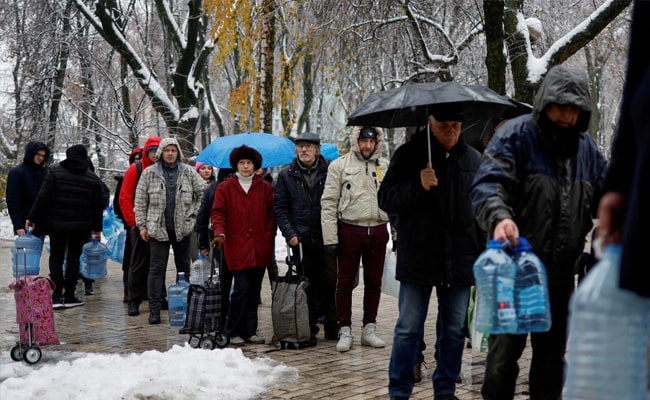 NATO allies will ramp up aid for Ukraine as Russian President Vladimir Putin is using winter as a weapon of war because his forces are failing on the battlefield, NATO Secretary-General Jens Stoltenberg said on Tuesday.

"I think we all have seen these pictures taken from satellites where you see Europe in light and then you see Ukraine dark...so there is a huge task to rebuild all of this," Mr Stoltenberg said.

"President Putin is trying to use winter as a weapon of war," he told reporters as NATO foreign ministers gathered in Bucharest for a two-day meeting which he said would serve as a platform to mobilise more support for Ukraine.

NATO foreign ministers will focus on increasing military assistance for Ukraine such as air defence systems and ammunition, even as diplomats acknowledge supply and capacity issues, but also discuss non-lethal aid.

Part of this non-lethal aid - goods such as fuel, medical supplies, winter equipment and drone jammers - has been delivered through a NATO assistance package that allies can contribute to and which Mr Stoltenberg aims to increase.

Mr Stoltenberg's comments were echoed by several ministers from the 30-member alliance, who were also be joined by Finland and Sweden, as they look to secure full membership pending Turkish and Hungarian ratifications.

"The coming months will be a big test for us all. For Ukraine it is existential, for us moral. We must continue helping Ukraine for as long as necessary," Slovak Foreign Minister Rastislav Kacer said.

Ukrainian President Volodymyr Zelenskiy warned his fellow citizens of new Russian attacks this week that could be as bad as last week's, the worst yet, which left millions of people with no heat, water or power.

Russia acknowledges attacking Ukrainian infrastructure. It denies its intent is to hurt civilians.

"It is going to be a terrible winter for Ukraine, so we are working to strengthen our support for it to be resilient," a senior European diplomat said.

Germany, which holds the G7 presidency, also scheduled a meeting of the Group of Seven rich nations with some partners on the sidelines of the NATO talks as it presses for ways to speed up reconstructing Ukraine's energy infrastructure.

The official did not specify what form the assistance would take or how much it would be worth.

Keep Calm And Give Tanks

On the military side, NATO keeps pushing weapons manufacturers to accelerate production but a second diplomat cautioned there were increasing problems with supply capacity.

Highlighting the view from Baltic states, which have been at the forefront of the support for Kyiv, Lithuanian Foreign Minister Gabrielius Landsbergis urged the alliance to press ahead with deliveries.

"My message to fellow foreign ministers at today's NATO meeting is simple: Keep calm and give tanks," he said on Twitter, showing an image of a Ukrainian flag with a tank in the middle.

Ministers will also discuss Ukraine's application for NATO membership. But they are likely to only confirm the alliance's open-door policy while NATO membership still appears far away.

"We stated that Ukraine will become a member, I expect allies to reiterate that position," Mr Stoltenberg said.

"However, the main focus now is on supporting Ukraine. We are in the midst of a war and therefore we should do nothing that can undermine the unity of allies to provide military, humanitarian, financial support to Ukraine."

In 2008, a NATO summit at the same Palace of the Parliament in Bucharest, built under dictator Nicolae Ceausescu who was toppled in 1989, agreed that Ukraine would eventually become a member of the alliance.

However, that summit stopped short of taking any concrete steps. In particular, Germany and France, warning against provoking Russia, rejected a proposal by the United States that would have seen Ukraine gaining a membership action plan.