Vladimir Putin in a Ukrainian Pickle 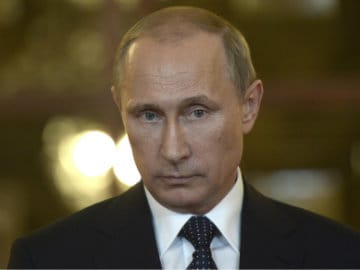 Moscow: Punitive sanctions and the calling into question of a key arms control treaty with Washington have ratcheted up pressure on Russia, leaving President Vladimir Putin few palatable options to resolve the crisis in Ukraine, analysts say.

Putin might have thought he could get away with keeping the conflict simmering with a divided Europe wary of imposing tough sanctions that could plunge its own economy back into recession.

But the downing of Malaysia Airlines flight MH17 over territory held by pro-Russian rebels last month, with the loss of all 298 people on board, including 193 Dutch nationals, forced the European Union into action.

For the first time, the sanctions imposed by Brussels and Washington last week apply to entire sectors, impeding access to Western capital markets and technology needed to develop new oil and gas fields, as well as an arms sales ban.

Many analysts believe that the measures will gradually impact the Russian economy, already teetering on the brink of recession.

But the ultimate question is whether they will have a political effect -- pushing Putin to stop supporting the pro-Moscow separatists in eastern Ukraine and to come to a mutually acceptable resolution of the crisis.

Adam Slater, senior economist at Oxford Economics, said that pulling back from Ukraine would appear the economically rational thing for Russia to do, but this is by no means guaranteed to happen.

"The political calculations being made by President Putin may be very different from the approach that might be followed by another leader in another country," he said in a recent report.

That is because Putin has created a popular political image as a strong leader who can stand up to the West, and during the Ukraine crisis he has styled himself as a defender of ethnic Russians abroad.

US President Barack Obama told a press conference Saturday Putin "should want to resolve this diplomatically, to get these sanctions lifted, get their economy growing again, and have good relations with Ukraine."

However he cautioned that "sometimes people don't always act rationally".

Yet the MH17 crash could give Putin an opportunity to break from the insurgents in Ukraine if they are determined to have shot down the plane, journalist and long-time Putin observer Andrei Kolesnikov believes.

"The death of children, adults and the elderly is a sort of red line that he won't cross... Putin will break with them," he wrote in the Russian daily Kommersant.

But others believe abandoning the pro-Russian rebels would be difficult, especially given that state media has been portraying them as defending ethnic Russians against neo-fascist Ukrainians. Putin has also faced growing calls from nationalists at home to send in troops.

Konstantin Kalachev, head of the Moscow-based Political Expert Group think-tank, said Putin hasn't taken the opportunities to disown the rebels that the crash has afforded, and he is now like a chess player faced with only bad moves.

"It's zugzwang, when each move only worsens the situation," Kalachev told AFP.

Putin's objective in Ukraine has been to keep the country out of the orbit of the EU and NATO.

When protesters earlier this year ousted pro-Moscow president Viktor Yanukovych from power in Kiev after he rejected an EU trade deal under Russian pressure, Putin seized the opportunity to take over Crimea.

And as the new Ukrainian authorities gravitated towards the West, a well-armed rebel movement led by former Russian officers sprang up.

Putin "miscalculated, thinking we can do what others can't," said Kalachev, pointing to the way Russians persevered for years to impose a military solution in Chechnya.

But if Putin's plan was to call the West's bluff over Ukraine, the MH17 disaster changed the dynamics of the crisis.

Washington doubled the ante by going public with accusations that Russia violated the Intermediate-Range Nuclear Forces Treaty (INF) by testing a cruise missile.

"You can't look at the case of the INF Treaty in isolation, only in the context of the general worsening of relations between Moscow and Washington over the Ukraine crisis and the Malaysian Boeing 777," the head of the International Security Centre at the Institute of World Economy and International Relations in Moscow, Alexei Arbatov, told the daily Kommersant this week.

Arbatov said going public with the complaints was a "psychological threat", as doing away with the treaty -- which bans all ground-launched medium range missiles -- would prove costly to Moscow.

After the collapse of the INF treaty "the United States would consider that it had the right to deploy its missiles in eastern Europe, dangling a new Sword of Damocles over Russia," Dmitry Polikanov, deputy head of another Russian think-thank, the PIR Centre, was quoted as saying by Kommersant.

The option of a full-on Russian intervention might also lead to the country's further isolation and a reinforcement of NATO.

"He is trying to find steps that don't appear as a retreat," she said.

Speaking at World War I commemorations on Friday, Putin drew many contemporary parallels, saying that history proved time and again that an "unwillingness to listen to each other" and respect each other's interests can have huge costs.

Promoted
Listen to the latest songs, only on JioSaavn.com
Lipman said that if the West wants a quick end to the fighting it will need to find an agreement with Putin as sanctions will only gradually have enough impact to cause political concerns for the Russian leader.

"Stopping the war should be the top goal for Europe, and that is impossible without Russia," she said.
Comments
Vladimir PutinUkraine conflictMoscowEuropean Union