61-year-old Joanne M Tanner was speeding when she went off the road, through a fence and into the water. 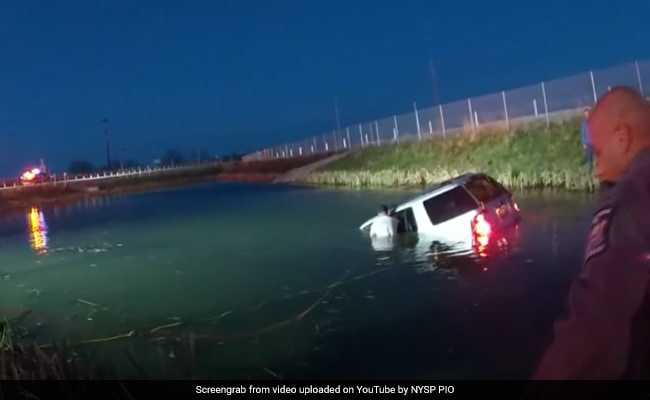 Joanne Tanner was arrested for driving while intoxicated or impaired and speeding.

A brave police officer in New York recently dragged an alleged drunken driver from her sinking car after she crashed it into a lake. According to Newsweek, 61-year-old Joanne M Tanner was speeding when she went off the road, through the fence and into the water. By the time the cops and firefighters arrived at the pond in Le Ray, her Ford Explorer was sinking fast.

A dramatic video of the rescue shared by New York State Police on YouTube shows a trooper leaping onto the roof of the sinking vehicle, smashing the sunroof and battering his way in through the glass.

Watch the rescue video below:

Newsweek reported that Ms Tanner was so close to drowning that the cop could see her hair floating up to the sunroof of the car.

At first, the cop, identified as John Russell, used a steel pole to break open the vehicle's rear window. However, as Ms Tanner was submerged to her shoulders and was not able to move, Mr Russell attempted to move her to the rear compartment but was unsuccessful. The cop could not even get the doors open as the locks of the car would not disengage.

Then, once the vehicle began filling with more water toward the front, another cop - Christopher J Hardy - moved on top of the vehicle to break open the sunroof while Mr Russell escaped out of the back. He successfully broke open the sunroof with a steel pole and got Ms Tanner out, following which the state police described the 61-year-old as being “conscious and alert”.

In a statement, the state police informed that after Ms Tanner was pulled to shore, she showed signs of hypothermia. She was immediately transported to Samaritan Medical Centre for hypothermia and minor lacerations.

The police continued that the driver was treated and released. She was subsequently arrested for driving while intoxicated or impaired and speeding. The 61-year-old was issued an appearance ticket and is now set to appear in court on May 27.