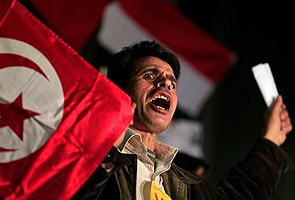 Prime Minister Mohamed Ghannouchi, a longtime ally of Ben Ali, and several top ministers retained their posts in the shake-up. Ghannouchi also announced that political prisoners would be freed, among an array of measures aimed at loosening up a political system that for decades was effectively under one-party rule.

A key question was whether the changes in the government lineup would be enough to stabilise the North African country that has been reeling amid continued unrest after Ben Ali fled fled on Friday 23 years after he first took power.

Ghannouchi, who has been premier since 1999 and has kept his post throughout the upheaval, said the current ministers of defence, interior and foreign affairs would keep their posts.

Three opposition figures, including Nejib Chebbi, a founder of the opposition PDP party, will take up posts in the government a breakthrough in a country that the autocratic Ben Ali led for more than two decades.

Until new presidential elections are held, the country is being run by interim president Fouad Mebazaa, former speaker of the lower house of parliament, also a veteran of Tunisia's ruling party.

Ghannouchi said all nongovernmental associations that seek it would be automatically recognized, and all the restrictions on the Tunisian League for the Defense of Human Rights would be lifted.

Many opponents of Ben Ali's rule have taken to the streets to express their hopes that the new government would not include of any remnants of his iron-fisted regime.

Earlier Monday, security forces fired tear gas to repel angry demonstrators ahead of the announcement. In a later march, a small, peaceful gruop of youths carried signs reading "GET OUT" under the gaze of watchful police, part of hundreds of security forces in the capital.

Promoted
Listen to the latest songs, only on JioSaavn.com
A union leader upset at the prospect of a government full of old guard ministers, predicted growing demonstrations to press for an end to power positions for the RCD.

"It (RCD) left by the back door and is coming back through the window," said Habib Jerjir, member of the executive bureau of the Regional Workers' Union of Tunis. "We can't have militias in the streets and in the government."
Comments
TunisiaTunisia governmentTunisia govtTunisia new govt