Sichuan Earthquake: The powerful earthquake struck Sichuan after mid-day on Monday, with the epicentre deep in the province's mountainous interior in the west. 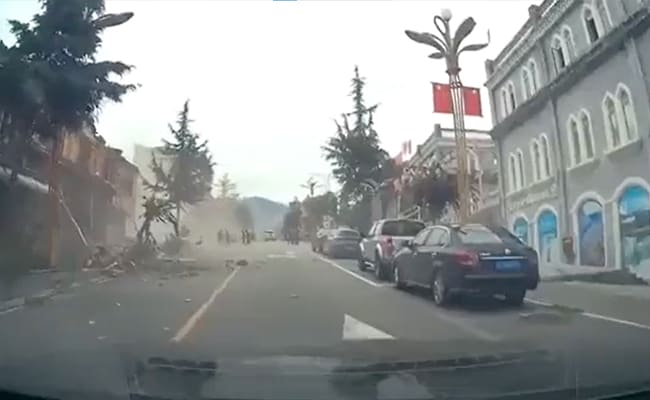 China was on Monday jolted by a 6.8-magnitude earthquake, one of the most powerful tremors to hit the southwestern Sichuan province in recent years. Sixty five people were died and over 50,000 relocated to safer areas as rescuers rushed to reach hundreds of stranded people, restore utilities and send emergency relief, according to news agency Reuters. Now a video has emerged on Twitter that shows the impact of the quake. The clip shows buildings collapsing and towers shaking.

The video, captured by a dashcam installed in a car moving on the same street when earthquake struck, is fast gaining traction.

Nearly 250 people are being treated for injuries, with dozens critically wounded, according to Chinese state media.

Rescuers are also working on retrieving over 200 people stranded in the quake zone, restoring telecommunications services and power and water utilities, as well as delivering food supply to residents affected by the magnitude-6.8 temblor, state media reported.

The powerful earthquake struck Sichuan after mid-day on Monday, with the epicentre deep in the province's mountainous interior in the west, said Reuters. The quake was felt as far away as the provinces of Shaanxi and Guizhou, hundreds of kilometers away.

On Tuesday, state television reported over 200 people were still stranded in Hailuogou, a popular tourist spot known for its glaciers, verdant forests and soaring peaks. Rescuers were still working to reopen blocked roads to reach them.

Earthquakes are common in Sichuan, especially in its mountains in the west, a tectonically active area along the eastern boundary of the Qinghai-Tibetan plateau.

Monday's quake was Sichuan's biggest since August 2017, when one of magnitude 7.0 hit the Aba prefecture north of Luding.

In recent decades, the most devastating earthquake in Sichuan - and China - was in 2008, when a magnitude 8.0 temblor centered in Wenchuan killed nearly 70,000 people.