Video Shows Powerful Tornado Tearing Through Kansas, Wreaking Havoc Throughout The US State

Kansas Tornado: Officials have said that assessments of the situation were still ongoing, with planes and drones being deployed to survey the damage. 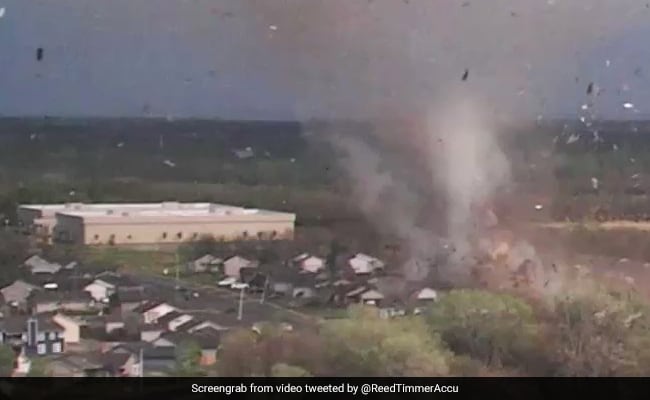 Tornado in Kansas: The Twister damaged 50 to 100 structures, especially in the suburb of Andover.

A tornado has been filmed tearing through parts of the US state of Kansas on Friday, damaging hundreds of homes and buildings. The close-range video shared by meteorologist Reed Timmer, shows the twister tearing through Andover, with debris flying in the air. In the caption, Mr Reed informed that the tornado that caused extensive damage mostly in the Wichita suburb of Andover and injured several people was rated an EF-3 on the Enhanced Fujita scale, which is used to assess the twisters.

The video of the tornado has taken the internet by storm. It has been viewed over 2.8 million times. Watch the clip below:

Highest-res drone footage of the Andover, KS #tornado which has received a preliminary rating of EF3. Note how the tornado propagates via vortex dynamics and likely terrain. Incredibly, no lives were lost by this tornado pic.twitter.com/FJDBH8TAv6

According to BBC, in the city of Wichita, the mayor has said that 50 to 100 structures had been damaged, especially in the suburb of Andover. Fortunately, there are so far no reports of any serious injuries. The local officials, speaking at a press conference, said that there had been no deaths despite the extent of damage to buildings and cars.

"Good news is, we've found no more injuries than we talked about last night," Fire Chief Chad Russell told local news, as quoted by BBC. "We have no reports of fatalities...we have no rescues outstanding, so we have no one that we know of that is trapped in a building right now that's waiting for us to rescue them,” Mr Russell added.

Officials have said that assessments of the situation were still ongoing, with planes and drones being deployed to survey the damage. For now, the Andover Police Department has said that roads leading into the city were closed as emergency teams worked to remove the debris and verify the damage made.

More details will likely emerge as the survey is completed, however, it is to mention that an EF-3 rating means that winds from the twister ranged between 136 and 165 mph. Mr Russell has stated that it will take years for Andover to recover from the storm.