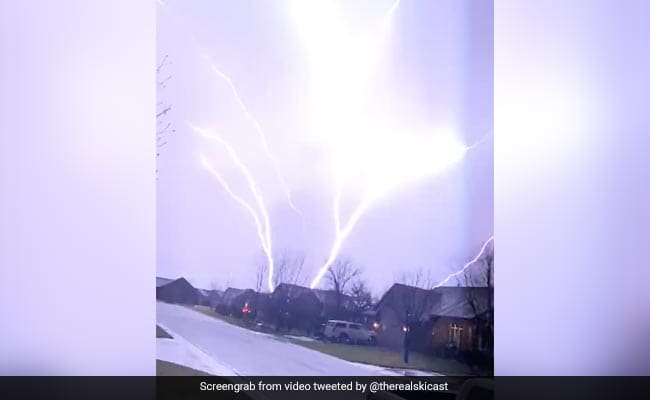 In the video, the bolt appears to begin at the ground and then travels towards the cloud

A spectacular lightning display illuminated the night sky over Kansas during a thunderstorm on Tuesday. A video of the incident, shows a rare upward strike, during the thunderstorm.

The upward lightning was caught in slow motion by Taylor Vonfeldt, who shared it on Twitter. He called the phenomenon the "most insane strike of lightning" he had ever caught on camera.

In the video, the bolt appears to begin at the ground and then travels towards the cloud, in stark contrast with traditional lightning strikes.

I just captured the most insane strike of lightning I've ever caught on camera.. 😳😱⚡️ @weatherchannel@KSNNews@KWCH12@KAKEnews@JimCantorepic.twitter.com/17TxaFiyXk

A meteorologist told New York Post that the phenomenon occurs when a strong electric field passes over a tall object like a skyscraper or radio tower. "Upward leaders are initiated off the tower as a result. They connect with the electric field in the cloud and you get lightning," said Meteorologist Chris Vagasky.

Tornado warnings have been issued in several counties in Kansas. The national weather service said that winds of 50-60 km were recorded in the area. Thousands of people in Wichita, Kansas experienced power outages on Tuesday night.