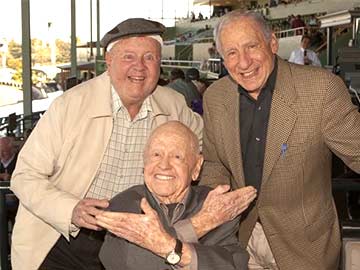 Los Angeles: Beloved US child star and comic actor Mickey Rooney, one of Hollywood's most enduring denizens whose career began in the silent film era, died on Sunday. He was 93.

Rooney rose to fame as the plucky diminutive lad in the successful "Andy Hardy" film series of the late 1930s and early 1940s.

He also had notable turns as Puck in "A Midsummer Night's Dream" (1935) and in "National Velvet" (1944), opposite fellow child actor, 13-year-old Elizabeth Taylor.

More recently Rooney appeared in the 2006 comedy "Night at the Museum," and in the 2011 movie "The Muppets."

Credited with performances in more than 200 films, Rooney was awarded an honorary Oscar in 1982 for lifetime achievement.

While professionally successful, Rooney had a rocky personal life -- married eight times, he legally separated from his last wife, Jan, in June 2012.

A lifetime of acting

The son of vaudeville performers who divorced when he was three, Rooney was born Joe Yule Junior on September 23, 1920 in Brooklyn, New York.

He went on the road with his parents' act at just two weeks old and accidentally became part of the act at 17 months.

Legend has it that a spotlight found the infant crouching underneath a shoeshine stand in the theater where his father was performing after he sneezed and blew his father's cover.

Startled, the toddler stood up and blew into a toy instrument attached to a string around his neck, and peals of laughter broke out in the audience.

Rooney made his big screen debut a few years later, in the 1926 film "Not to Be Trusted," and from 1927 to 1933, he went on to make about 50 silent comedies playing the comic-strip character Mickey McGuire.

Later, after meeting Judy Garland at an acting class, he appeared with the popular young actress in a string of successful films, including the "Andy Hardy" series.

Having been the number-one US box office draw from 1939 to 1941, Rooney found it difficult to relaunch his career when he returned to Hollywood after being drafted during World War II.

But he eventually landed his own television show, "The Mickey Rooney Show," in 1954, and in the 1960s, he made the rounds of nightclubs and the theater circuit.

He was also nominated for a Tony Award for best actor in 1980 for his Broadway role in "Sugar Babies."

Speaking in an interview once about his multiple marriages, which included a trip down the aisle with sultry Hollywood legend Ava Gardner, Rooney quipped: "When I say 'I do,' the Justice of the Peace replies, 'I know, I know.' I'm the only man in the world whose marriage license reads, 'To Whom It May Concern.'"

"I had bad luck in marriage," Rooney said in a 2003 interview with a Florida newspaper, "but I'm grateful that they left me with seven sons and four daughters and seven grandchildren."

His final wife, Jan Chamberlin Rooney, told the Florida paper she "didn't want to marry him because of his track record, but I really fell in love with him. We've been married 30 years, and it's the ups that count."

That fairy tale marriage however also ended in acrimony when the couple separated in 2012.

Promoted
Listen to the latest songs, only on JioSaavn.com
In March 2011 Rooney traveled to Washington DC, where he testified to a US Senate committee on elder abuse.

A few months later he filed elder abuse and fraud charges against stepson Christopher Aber, the son of his last wife, and Aber's wife. A court issued a restraining order against the Abers, and the case was settled in 2013 in Rooney's favor.