The incident comes after two deadly Islamist-inspired attacks this year that used vehicles to ram pedestrians. 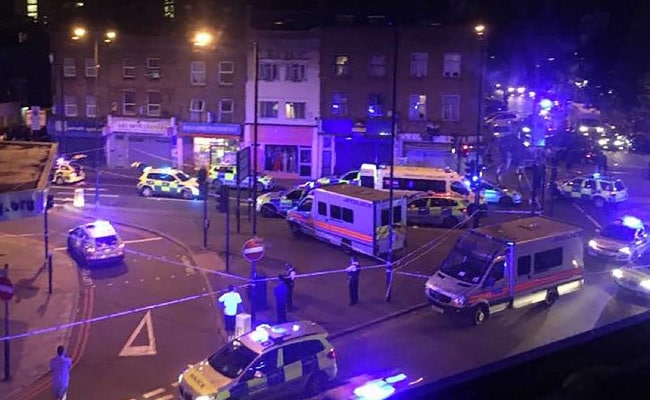 London: A van ploughed into pedestrians near a London mosque in early Monday, killing one man and injuring eight other people in what Prime Minister Theresa May said was "a potential terrorist attack". The 48-year-old driver of the van was detained by members of the public and then arrested by police. Muslim leaders said worshippers were specifically targeted after leaving prayers near Finsbury Park mosque in north London shortly after midnight and linked the incident to a recent rise in anti-Muslim hate crime.

Witness Abdiqadir Warra told AFP the van "drove at people" and some of the victims were carried for several metres along the road.

London Mayor Sadiq Khan said it was a "horrific terrorist attack," calling it "deliberate" and aimed at "innocent Londoners, many of whom were finishing prayers during the holy month of Ramadan".

May was due to hold an emergency ministerial meeting later on Monday to discuss the attack. 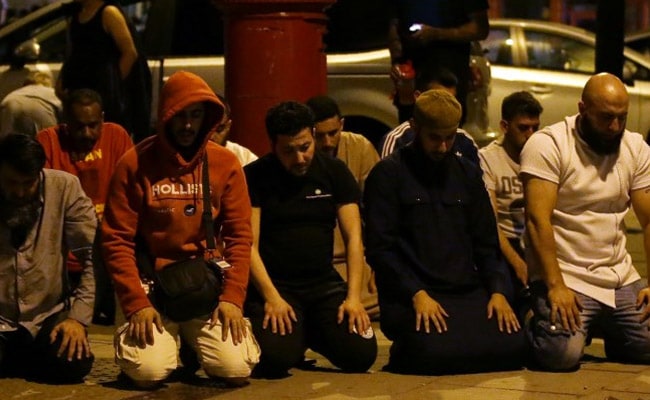 Muslims pray on a sidewalk in the Finsbury Park area of north London after a vehicle hit pedestrians.

It comes after two deadly Islamist attacks this year that used vehicles to ram pedestrians -- one earlier this month in the London Bridge area and a March attack in which a man drove a car into crowds on Westminster Bridge.

One witness, Abdul Rahman, told the BBC he saw the van "deliberately run over about 10 or 15 people". Rahman said he and another man wrestled the suspect to the ground and held him down for 20 to 30 minutes before police arrived.

A police statement said "One man was pronounced dead at the scene... Eight people injured were taken to three separate hospitals."

Two other people were treated at the scene for light injuries. Police said the male driver had also been taken to hospital as a precaution and would receive a mental health assessment.

Amateur video footage seen by AFP showed at least three people lying on the ground, including one who was receiving mouth-to-mouth resuscitation.

"Due to the nature of this incident, extra policing resources have been deployed in order to reassure communities, especially those observing Ramadan," the police statement said. 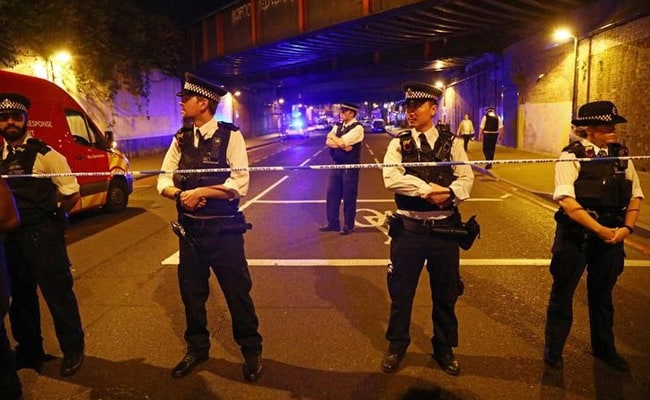 Police attend to the scene after a vehicle rammed pedestrians in London's Finsbury Park. (Reuters)

Prayers on the pavement

The Muslim Council of Britain (MCB), an umbrella body for British Muslims, said the incident occurred outside the Muslim Welfare House on Seven Sisters Road, near the Finsbury Park mosque.

"Over the past weeks and months, Muslims have endured many incidents of Islamophobia and this is the most violent manifestation to date," MCB head Harun Khan said.

Police, including armed officers, could be seen manning a wide cordon around the area. Others searched the area with sniffer dogs.

A group of Muslim men were praying on the pavement nearby. Traffic was shut down along a one-kilometre section of the road.

Finsbury Park mosque was once a notorious hub for radical Islamists but has entirely changed in recent years under new management.

Its former imam Abu Hamza was jailed for life in New York on terrorism charges in 2015.

He preached there from 1997 to 2003 before being jailed for inciting violence. He was later extradited to the United States.

In 2015, the mosque was one of around 20 that took part in an open day organised by the MCB to promote better understanding of Islam following Islamist-inspired terrorist attacks in Paris.

Despite the change in leadership and a new focus on inter-faith relations, the mosque reported it had received a string of threatening emails and letters in the wake of the terror attacks in Paris.

Monday's incident in London follows an Islamist-inspired attack on June 3 in which three militants wearing fake suicide vests ran over pedestrians and went on a stabbing spree in bars in the London Bridge area.

They killed eight people before being shot dead by police.

London Mayor Khan said following that attack that there had been a 40-percent increase in racist incidents in the city and a fivefold increase in the number of anti-Muslim incidents.

On his Facebook page, Khan at the time called on Londoners "to pull together, and send a clear message around the world that our city will never be divided by these hideous individuals who seek to harm us and destroy our way of life".

Britain has seen two other attacks this year.

On March 22, a man drove a rented car into pedestrians on Westminster Bridge in London and stabbed a police officer guarding the British parliament to death before being shot dead.

Promoted
Listen to the latest songs, only on JioSaavn.com
Five people were killed in the attack.

On May 22, a suicide bomber blew himself up outside a pop concert in Manchester, killing 22 people.