Use Huawei And Lose Access To Our Data, US Tells Germany

US Secretary of State Mike Pompeo is expected to continue pressing the issue in a meeting with Chancellor Angela Merkel on his delayed trip to Berlin. 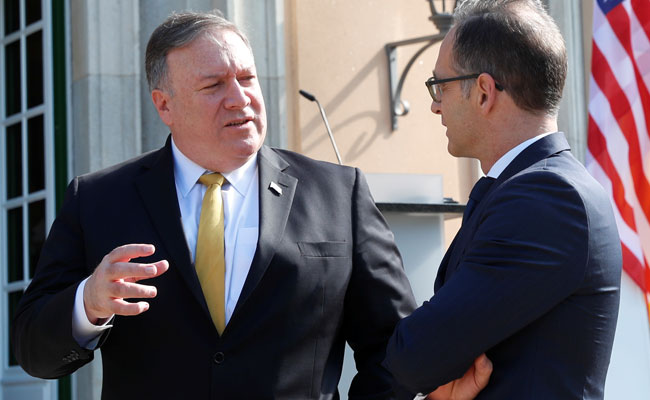 The United States may no longer share sensitive security information with nations that install next-generation networks, like those made by China's Huawei, that it regards as insecure, US Secretary of State Mike Pompeo said on Friday.

Pompeo issued the warning after meeting his German counterpart Heiko Maas in Berlin, which has so far stood with European partners in resisting US calls to ban the state-owned manufacturer from 5G mobile networks now being built.

While he said all countries would take their own sovereign decisions on which manufacturers to use, the United States would continue to warn them of the risks, including the possibility that Washington would have to withold information.

"(There is) a risk we will have to change our behaviour in light of the fact that we can't permit data on private citizens or data on national security to go across networks in that we don't have confidence (in)," he told a news conference.

Pompeo is expected to continue pressing the issue in a meeting with Chancellor Angela Merkel on his delayed trip to Berlin, the first stop in a five-day European trip that will also take him to Switzerland, the Netherlands and Britain.

Pompeo urged close ally Britain this month not to use Huawei's technology to build new 5G networks because of concerns it could be a vehicle for Chinese spying.

The United States is at odds with its German allies on a host of issues, from trade to military spending and nuclear non-proliferation.

Pompeo's visit had been scheduled earlier this month, but was called off at the last minute as tensions rose over Iran, on whose nuclear programme Berlin and Washington do not see eye to eye.

A Chinese foreign ministry spokesman, responding to similar comments on Huawei made by US Vice President Mike Pence in Canada on Thursday, said the United States had yet to prove that Huawei's products presented a security risk.

"We hope that the United States can stop these mistaken actions which are not at all commensurate with their status and position as a big country," said spokesman Geng Shuang.

He also said that the United States was attempting to verify reports that a senior North Korean official involved in Pyongyang's non-proliferation talks with Washington had been executed.

(Except for the headline, this story has not been edited by NDTV staff and is published from a syndicated feed.)
Comments
Mike PompeoHeiko MaasHuwaei Technologies