US Unemployment Falls To 10-Year Low In April

The result handily surpassed an analyst consensus, which had predicted 180,000 new jobs for the month, and rebound in the unemployment rate to 4.6 percent. 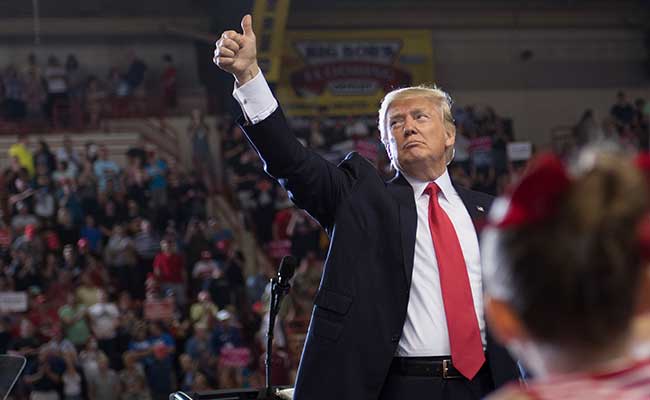 Donald Trump has vowed to add 25 million new jobs over a decade.

Washington: Unemployment in the world's largest economy fell to the lowest rate in 10 years due to a strong rebound in job creation in April, bringing relief to Donald Trump after disappointing economic data early in his presidency.

After a slow March, when hiring likely was held down by a winter storm, the US economic engine added an estimated 211,000 net new positions while the jobless rate fell a tenth to 4.4 percent, the lowest since May 2007, the Labor Department reported Friday.

The solid data strengthen the case for the Federal Reserve to stick to a planned course of two more interest rate hikes in 2017, and may even begin to worry the inflation hawks among the central bankers.

The result handily surpassed an analyst consensus, which had predicted 180,000 new jobs for the month, and rebound in the unemployment rate to 4.6 percent.

The White House hailed the news after a first quarter when economic data appeared to have softened. Trump has vowed to add 25 million new jobs over a decade but economists say this may be unrealistic.

In his weekly address, Trump said his administration was "hard at work, tearing down the barriers to job creation."

"The president and his entire team will continue this laser focus on creating jobs for hard-working Americans and growing the US economy," she told reporters.

The jobs report pointed to continuing economic recovery but also to an increasingly tight labor market, which could begin to fuel inflation worries, especially as wages continued to climb in April.

Average hourly earnings rose nearly 0.3 percent for the month to $26.19. But measured over 12 months, the gains appeared softer. April wages were 2.5 percent higher than the same month last year, down from the 2.6 percent gain recorded in March.

The unemployment rate has now fallen 0.6 percentage points since the start of the year, with 854,000 fewer unemployed people, while average monthly job creation of 185,000 so far in 2017 is in line with last year's trend.

"I think if you asked any economist a year and a half ago what wages would be doing if the unemployment rate was around four and a half percent for some months, we would have said more acceleration than we're actually seeing," he told CNBC.

"And we're not getting it."

But most economists think the report provides more justification for the Fed to continue its gradual rate increases, a process it calls "normalization" from the zero rates during the financial crisis.

Mickey Levey of Berenberg Capital Markets said, "the Fed is a lock to raise rates at its June meeting."

"The Fed is firmly on a policy normalization track and wants to get rates up to more normal levels, especially given prospects for fiscal reform and its potential to boost the economy," he said in a note to clients, adding that an acceleration in wages "could be close."

Those central bankers most worried about inflation pressures, the so-called hawks, "will now be even keener to see rates rise further, despite the levelling-off in hourly wage growth in recent months," he said.

However, Elise Gould of the Economic Policy Institute said a healthy economy should produce 12-month wage growth of between 3.5 and four percent, meaning the Fed should hold off on future rate hikes.

"For the benefits of a growing economy to reach every community, the labor market has to be allowed to tighten up further so that employers are competing for workers and not the other way around," she said in a research note.

While the share of long-term unemployed, or those without work for more than 26 weeks, was little changed at 1.6 million, other categories saw distinctly positive signs.

Promoted
Listen to the latest songs, only on JioSaavn.com
So-called discouraged workers, or those who have stopped looking for work because they believe none is available, declined by 113,000 from a year earlier to 455,000.

(This story has not been edited by NDTV staff and is auto-generated from a syndicated feed.)
Comments
US unemployment rateDonald TrumpFederal Reserve