US Teen, 13, Dies After Alleged Beating By Classmates At School

The two boys accused of attacking Diego were arrested and face the juvenile court equivalent of assault charges. 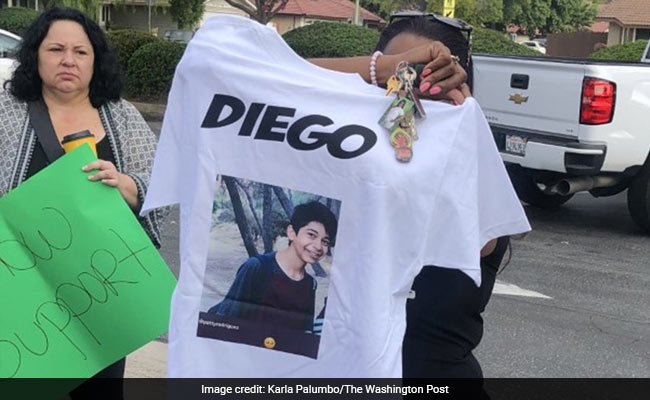 A 13-year-old California boy has died more than a week after being punched by two classmates in an attack that was caught on video.

The middle school teen who has only been identified by his first name, Diego, was pronounced clinically dead on Tuesday night, the Riverside County Sheriff's Department said in a statement. Diego had been hospitalized since the September 16 attack at Landmark Middle School in Moreno Valley, California, roughly 65 miles east of Los Angeles. The sheriff's department said Diego's family will donate the boy's organs "to transform this tragedy into the gift of life for other children."

Families in the 33,000-student Moreno Valley Unified School District reacted with grief and outrage after the attack. Parents and students gathered last Friday in a "Ditch for Diego" protest that went from a nearby community park to the district's registration office. Diego's death on Tuesday night prompted more memorials, vigils - and heated confrontations with district officials whom some parents and students accuse of mishandling what they call a pervasive bullying problem.

Facebook video of the attack shows Diego facing a taller boy who briefly looks away before suddenly punching Diego in the head. A second boy quickly follows with a blow that appears to knock Diego's head into a concrete pillar. The first boy then punches Diego, now on the ground, as students can be heard gasping and screaming.

Diego's classmates told TV station KTLA the boy had been bullied before, including on social media.

The two boys accused of attacking Diego were arrested and face the juvenile court equivalent of assault charges, the Riverside County District Attorney's Office told The Washington Post. Neither boy has been named since they're both minors. The initial hearings for each boy are set for Oct. 2 and Oct. 15 respectively. John Hall, a spokesman for the prosecutor's office, said charges could be amended or added as the office receives new information in the investigation.

One parent with the Moreno Valley Unified School District said the past week has been an emotional one for students and parents in the community. Mixed in with the grief over Diego's death is frustration that the school district hasn't done enough to address their concerns for students' safety.

"We're all very furious. We're obviously mourning the death of this child," parent Karla Palumbo, 40, told The Post. "And more than anything, [families in the school district] want justice. The community has had enough."

Palumbo's three children attend schools in the same district as Landmark and said they've experienced bullying incidents that the district at large failed to respond to in an adequate way. One of her daughters, now 14, would come home from elementary school with bruises after her classmates verbally and physically abused her, Palumbo said.

"[Bullying] is all over the Moreno Valley school district. My daughter, still to this day, has been getting bullied - and not only by students, but by teachers," Palumbo said. "You can see staff walking by these fights, and they don't step in, they just walk away."

The Moreno Valley Unified School District didn't immediately respond to written requests for comment on the accusations of pervasive bullying. The Post also reached out for information on the district's protocols for how teachers and staff are expected to handle bullying and on security and safety measures at Landmark and other district schools.

Moreno Valley Unified School District Superintendent Martinrex Kedziora addressed concerns during a news conference Wednesday and insisted the district has measures in place to keep students "safer than they've ever been." Kedziora said there were more security personnel at Landmark, more mental health resources available to students and a tip line where students can report bullying. Teachers, he said, were more vigilant in looking out for warning signs of potential violence.

Still, Kedziora declined to say if he thought Diego's death was preventable.

"It's still under investigation, so I really can't comment on that at this time," he said.

During a Wednesday night vigil for Diego at Landmark, students and parents confronted the superintendent, whom some have called on to resign.

"We came here for Diego, and we came here for the community and our children," parent Mia Carino, who has a child expected to attend Landmark in a few years, said, according to the Press Enterprise. Kedziora "owes us answers," she said. "Where was the security? Why did Diego's family come a week before the attack? They reported the bullying, and nothing happened."