According to scientists, climate change could be an aggravating factor for extreme weather events like snowstorms, as well as deadly floods, typhoons and heat waves. 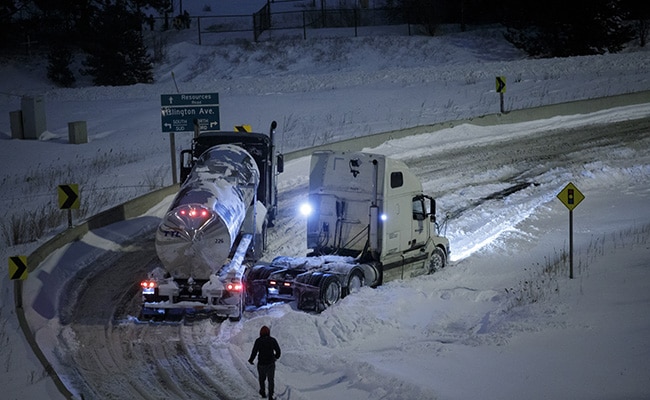 A major winter storm blanketed a swathe of North America in snow Monday as it sliced up the US east coast into Canada, disrupting travel and cutting power to thousands of homes.

Many Americans who had been without electricity -- about 120,000 of them Monday afternoon -- seemed to be back online by the evening, according to the website PowerOutage.us. The biggest concentration of outages came in the mid-Atlantic state of West Virginia and the southeastern states of North and South Carolina and Georgia.

More than 1,700 flights within, into or out of the United States were canceled by Monday evening, in addition to the 3,000 the day before, according to flight-tracking website FlightAware.

Large parts of the Canadian provinces of Quebec and Ontario remained under winter storm or blizzard warnings, according to a Canadian government website.

In Toronto, up to two feet (60 centimeters) of snow was expected -- "a historic storm for the city," tweeted Anthony Farnell, chief meteorologist of Canadian TV channel Global News.

"The @cityoftoronto has declared a major snow storm condition in response to today's heavy and disruptive snowfall which will help support our city-wide snow removal operations," Toronto Mayor John Tory tweeted Monday, and triggering a rule that prevents cars from parking in certain areas while the powder is cleared.

Many schools were closed and school buses were not operating in Quebec and the south of Ontario, including the Toronto area. Students had been due to return to classrooms on Monday in both provinces after the holiday break.

Monday was a national holiday in the United States, so most schools and businesses were already closed, though many people usually take the opportunity to travel during the long weekend.

The US National Weather Service (NWS) said earlier it expected the storm to "slowly wind down today," but that snow would continue to fall through the evening in upper New York and New England.

The heaviest snowfall was recorded in Ashtabula, Ohio, the agency said.

"Significant impacts due to snow, ice, wind, and coastal flooding will persist across a large area," NWS said in a tweet.

The storm spawned damaging tornadoes in Florida, while in the Carolinas and up through the Appalachian mountain region, icy conditions and blustery winds raised concerns.

According to scientists, climate change could be an aggravating factor for extreme weather events like snowstorms, as well as deadly floods, typhoons and heat waves.

Transport was also seriously disrupted, with drivers warned of hazardous road conditions and major travel headaches from the southern US state of Arkansas to Quebec.

A portion of busy interstate highway I-95 was closed in North Carolina.

In Toronto, police tweeted that they had closed two sections of highway due to extreme weather, and asked drivers to stay home, "unless it's absolutely necessary."

"We're seeing a number of cars having to stop and de-ice their windshield," the Quebec transportation ministry tweeted Monday morning.

"Heavy precipitation and gusts allow ice to form, despite windshield wipers -- all the more reason to stay home!"

US officials also discouraged driving, and many states prepositioned teams to deal with the emergency, especially in the south, where snow is much less common.

The northeastern United States already experienced snow chaos earlier this month. When a storm blanketed the northeast, hundreds of motorists were stuck for more than 24 hours on the I-95, a major highway linking to Washington.