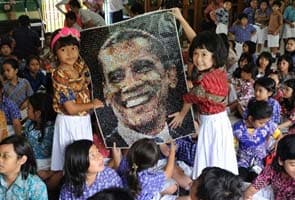 Jakarta: From his old school in Indonesia to a Japanese beach town that happens to share his name, people around the world cheered President Barack Obama's re-election on Wednesday.

The results of Tuesday's election were closely watched in many countries. Several U.S. embassies held mock elections and threw parties as returns came in.

At Jakarta's Menteng 01 Elementary School, which Obama once attended, students happily marched with a poster of the president from one classroom to another after hearing that he had defeated Republican Mitt Romney to win a second term. "Obama wins ... Obama wins again," they shouted.

A statue of a young "Barry" Obama, as he was called as a child, stands outside the school.

"I want to be like him, the president," student Alexander Ananta said.

The news also thrilled Obama's former nanny in Indonesia, Evie, who became well known this year following reports of her struggles living in the conservative country as a transgender.

"Hopefully, he will contribute to the betterment of not only American citizens, but to the world as well," said Evie, who like many Indonesians uses only one name.

British Prime Minister David Cameron posted his regards on Twitter: "Warm congratulations to my friend (at)BarackObama. Look forward to continuing to work together."

Israeli Prime Minister Benjamin Netanyahu, who has had a strained relationship with the American president over his policies on Iran and the Israeli-Palestinian conflict, congratulated the president in a text message to reporters. "I will continue to work with President Obama to preserve the strategic interests of Israel's citizens," he said.

The Western-backed Palestinian Authority has been disappointed that Obama did not pressure Israel to make greater efforts to make peace with the Palestinians, including a freeze on all settlement construction. In the absence of negotiations, senior Palestinian official Saeb Erekat urged the U.S. president to reverse course and support Palestinian efforts to seek U.N. General Assembly recognition of an independent state of Palestine.

"We have decided to take our cause to the United Nations this month, and we hope that Obama will stand by us," Erekat told Wafa, the official Palestinian news agency.

In China, Obama's re-election was good news for people concerned about Romney's vow to label China a currency manipulator if elected. Some feared that would ignite a trade war between the world's two biggest economies.

"His re-election is in line with what the Chinese people want," said Hong Zihan, a graduate student who monitored the results at a U.S. Embassy event in Beijing.

"Four more years," Yomo said. "So we are happy this will continue and help with building our city."

In Myanmar, which is pushing political reforms forward after five decades of military rule kept it isolated from much of the rest of the world, some said they were relieved Obama was re-elected because he chosen to engage rather than sanction their country.

Washington has started focusing more on Asia since Obama took office. Some Asian countries, including the Philippines and Vietnam, have been looking more toward the U.S. as tensions flare with China over disputed territories in the South China Sea.

"In Asia, he needs to fine tune the building of alliances without overtly appearing anti-China," Ramon Casiple, a political analyst in the Philippines, said of Obama. "At the same time, he needs to encourage countries with border disputes with China that he's on their side."

A spokesman for the main Syrian opposition bloc, the Syrian National Council, expressed hope that the election victory would free Obama to do more to support those trying to oust Syrian President Bashar Assad.

"We hope this victory for President Obama will make him free more to make the right decision to help freedom and dignity in Syria and all over the world," SNC spokesman George Sabra said on the sidelines of an opposition conference on the Qatari capital of Doha.

Sabra renewed the opposition's appeal to the international community to supply rebel fighters with weapons.

The Obama administration and its Western allies have ruled out military intervention in Syria. The U.S. has also been cool to opposition rebels' demands for weapons such as anti-aircraft missiles, out of concern that they could fall into the wrong hands. The U.S. and other foreign backers of the Syrian uprising have urged the fractured, largely exile-based opposition to unite and include more representatives from inside Syria.