Teen Identified As Suspect In US Synagogue Shooting

US President Donald Trump expressed his "deepest sympathies" for the victims of the California synagogue shooting, which he said "looks like a hate crime," 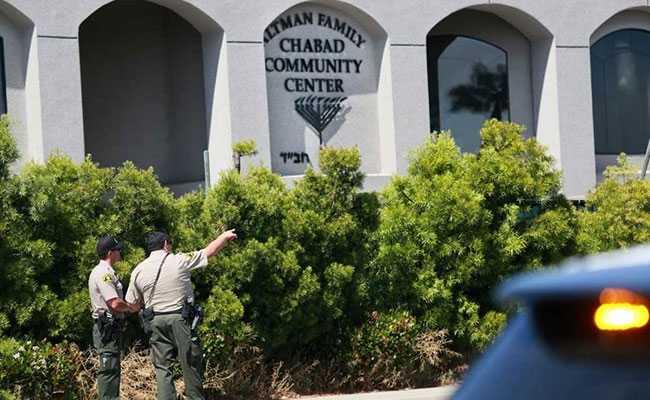 The shooting happened at the Chabad of Poway synagogue in California

A 19-year-old man with an assault rifle opened fire at the Chabad of Poway synagogue in Poway, California, Saturday morning, leaving one dead and three injured, according to authorities.

One of the victims, a woman, "succumbed to their wounds," Vaus said. The three others - a girl and two men - remain in the hospital with non-life-threatening injuries.

"I can only tell you that we have a fatality," Vaus told MSNBC, "and I can also tell you that it was a hate crime, and that will not stand."

Saturday's shooting comes six months after the massacre at Pittsburgh's oldest synagogue, Tree of Life, where an armed shooter killed more than 11 people and injured six others in the deadliest attack on Jews in the history of the United States. And in an apparent manifesto posted online, the alleged shooter drew inspiration for his attack from that tragedy as well as the mosque shooting in New Zealand in March.

Authorities identified the suspect as John Earnest according to the Associated Press. He turned himself in shortly after the shooting. The man had an assault rifle in his car and is in custody for questioning, officials said.

The alleged shooter had no earlier contact with law enforcement, Gore said. In a manifesto published online Saturday under the name John Earnest, the writer described plans to kill Jews, referring to himself as an "anti-Semite" and "white supremacist." It referenced the alleged shooters at the Pittsburgh Tree of Life synagogue and the New Zealand mosque, Jesus Christ and Adolf Hitler as role models. The writer expressed no remorse for his impending actions.

In a message on 8chan, an Internet message board, a user who appears to be Earnest shared the manifesto and announced his plan to live-stream his actions on Facebook, sharing a link, but the social media platform appears to have blocked or deleted the profile before it gained widespread attention.

In his 8chan message, the user references the "red pill" movement, which codified on Internet message boards and revolves around the idea of men's rights, anti-feminism and alt-right, and generally promotes a misogynistic worldview. The movement lifted its name from the movie "The "Matrix," in which the main character Neo takes a red pill to wake up to the harsh truths of reality. Those who wish to remain ignorant of the truth take the blue pill.

The red-pill metaphor is thought to extend to "Alice in Wonderland," when Alice had to choose between two colored potions to decide whether to remain in Wonderland or go home.

The three injured in Saturday's shooting are in stable condition, authorities said. Among the injured was Rabbi Yisroel Goldstein. Sheriff Gore said the rabbi was wounded in the hand and is undergoing surgery. Minoo Anvari, a member of the congregation, told CNN that "[Goldstein] did not leave his congregation until he was finished speaking to them - calming their fears and pledging resilience."

The Poway shooting occurred one week after Easter Sunday on the last day of Passover, a holiday celebrating Jewish freedom from persecution.

Chabad is an orthodox Jewish Hasidic movement. Chabad Houses, like Jewish community centers, foster a philosophy of inclusion, opening their doors to individuals of all faiths and levels of observance.

The Chabad of Poway hosts a weekly "Kiddush" luncheon after Shabbat morning services conclude. On Saturday, it also held a Passover celebration, according to 10News, which was scheduled to begin at 11 a.m. and end at 7 p.m. with a final holiday meal.

The San Diego County Sheriff's Department responded to reports of an active shooter at the synagogue just before 11:30 a.m. Two prayer services were in session at the synagogue at the time of the shooting.

The Poway Sheriff's Station confirmed the shooting via Twitter, after deputies were called to the scene by "reports of a man with a gun."

President Donald Trump expressed his "deepest sympathies" for the victims of the shooting, which he said "looks like a hate crime," before departing for a rally in Wisconsin.

"My deep condolences to all of those affected," the president added.

Other political and religious leaders condemned Saturday's attack and voiced their support of the Jewish community.

Sen. Kamala Harris, D-Calif., said on Twitter: "Yet again a place of worship is the target of senseless gun violence and hate. Anti-Semitism is real in this country and we must not be silent - enough is enough."

Rep. Scott Peters, D-Calif., also posted on Twitter, condemning the act of violence: "Tragic news that a gunman has attacked Chabad of Poway synagogue, on this, the last day of Passover, a day that is supposed to be a celebration of faith and freedom. I am thinking of, and praying for, those hurt and affected."

"This is one more demonstration that we have a new normal, and that we have become so divided that . . . we are allowing the divisions to lead to hate and allowing the hate to lead to violence," Hickenlooper, who was governor during the Aurora movie theater shooting in 2012 that killed 12 people, told reporters after speaking at a labor forum in Las Vegas Saturday afternoon. "It is a combination of President Trump's leadership at the top but tied into some of the real challenges we have around issues of mental health. People seem so vulnerable to the hatred."

The Anti-Defamation League, which has recorded mass murders of Jews in the United States for decades, also vowed to work with law enforcement to monitor the situation.

"The Jewish community again is devastated," Jonathan Greenblatt, the organization's chief executive, said on Twitter Saturday. "It's heartbreaking to see yet another tragedy on Shabbat, on Passover, exactly 6 months after the Tree of Life."

The Washington Post's Anu Narayanswamy and James Hohmann contributed to this report.

(Except for the headline, this story has not been edited by NDTV staff and is published from a syndicated feed.)
Comments
US shootingUS synagogue shooting