Blood Clot Formed In Exact Shape Of A Lung Passage. Man Coughed It Out 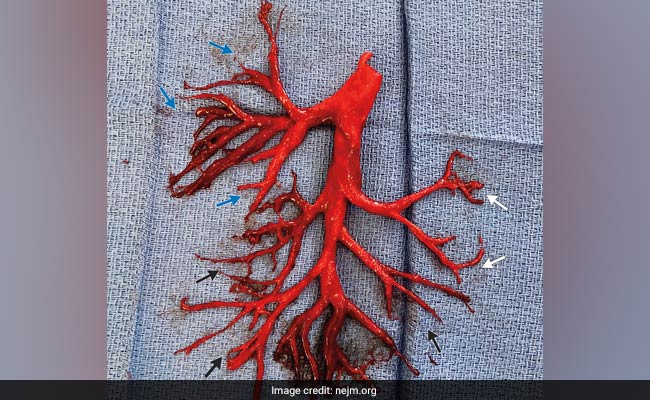 The patient had come in for heart failure, and physicians at the University of California at San Francisco had an aggressive plan to help.

Doctors there inserted a heart pump through his leg artery to flood his organs with blood. But there is a downside to the strategy - clots can form through its use. So doctors gave the unidentified man anticoagulants to thin his blood.

But his airways began to seep.

"He had a slow bleed that was ongoing despite the medication," Gavitt Woodard, a cardiothoracic surgery fellow at the university hospital, told The Washington Post.

Clots formed. The patient coughed them up over days, Woodard said. They were cylindrical and minor at first, like small worms.

Then the patient thundered a hard cough and "ejected" a blood-red tangle measuring about six inches across. The patient's blood pooled in his right bronchial tree - part of the network where air travels through the lungs - and solidified "like Jell-O," Woodard said (Representational)

Woodard's team, along with fellow physician Georg Wieselthaler, carefully laid out the clot on a surgical towel.

What they found was astonishing. The patient's blood pooled in his right bronchial tree - part of the network where air travels through the lungs - and solidified "like Jell-O," Woodard said. And it came out whole and intact.

"No one on our team has seen anything close to this," she said.

The 36-year-old patient was incubated for two days after the incident, which happened "recently," Woodard said, though she declined to give any more details, citing patient privacy.

He died a week later, Woodard said, but his death was unrelated to the incident. He had a host of severe conditions, and the clots he coughed up were a side effect of the medication, she said.

The clot did not help researchers advance medical knowledge, she said.

But its photo has captivated people in ways medical journal articles often do not since being published in the New England Journal of Medicine on Nov. 29.

The clot is also an opportunity to show how intricate the human body is, Woodard said, something everybody thought they knew until it was presented in a different way - like the impossibly detailed formations of fallen ice under a microscope.

"It's like the biggest snowflake you've ever seen," Woodard said.