US Ambassador to the United Nations Nikki Haley has said she wants the 15-member council to vote on Monday on the draft resolution to impose new sanctions over North Korea's sixth and largest nuclear test. 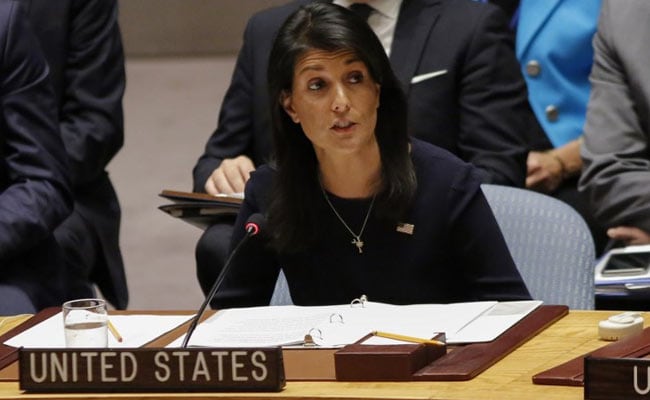 United Nations: The United States wants the United Nations Security Council to impose an oil embargo on North Korea, ban the country's exports of textiles and the hiring of North Korean labourers abroad, and subject leader Kim Jong Un to an asset freeze and travel ban, according to a draft resolution seen by Reuters on Wednesday.

US Ambassador to the United Nations Nikki Haley has said she wants the 15-member council to vote on Monday on the draft resolution to impose new sanctions over North Korea's sixth and largest nuclear test. However, Russia's UN Ambassador Vassily Nebenzia has said a Monday vote may be "a little premature."

It was not immediately clear if the draft resolution had the support of North Korean ally China. Russian President Vladimir Putin insisted on Wednesday that resolving the North Korean nuclear crisis was impossible with sanctions and pressure alone.

A resolution needs nine votes in favour and no vetoes by the United States, Britain, France, Russia or China to be adopted.

Since 2006, the Security Council has unanimously adopted eight resolutions ratcheting up sanctions on North Korea over its ballistic missile and nuclear programs. Haley said the incremental approach had not worked and a diplomatic solution could only be reached by imposing the strongest sanctions.

The new draft resolution would remove an exception for transhipments of Russian coal via the North Korean port of Rajin. In 2013 Russia reopened a railway link with North Korea, from the Russian eastern border town of Khasan to Rajin, to export coal and import goods from South Korea and elsewhere.

Some diplomats estimate that between 60,000 and 100,000 North Koreans work abroad. A UN human rights investigator said in 2015 that North Korea was forcing more than 50,000 people to work abroad, mainly in Russia and China, earning between $1.2 billion and $2.3 billion a year.

The draft resolution would ban textiles, which were North Korea's second-biggest export after coal and other minerals in 2016, totalling $752 million, according to data from the Korea Trade-Investment Promotion Agency (KOTRA). Nearly 80 percent of the textile exports went to China.

The assets of military-controlled airline, Air Koryo, would be frozen if the draft resolution is adopted. It flies to Beijing and a few other cities in China, including Dandong, the main transit point for trade between the two countries. It also flies to Vladivostok in Russia.

The draft resolution would allow states to intercept and inspect on the high seas vessels that have been blacklisted by the Security Council. Currently nearly two dozen vessels are listed and the new draft text would add another nine ships.

The draft resolution does not contain any new language on the political track. It again reaffirms council support and calls for a resumption of talks between North Korea, the United States, South Korea, China, Japan and Russia.

Promoted
Listen to the latest songs, only on JioSaavn.com
China and Russia have been pushing their proposal to kick-start talks with a joint suspension of North Korea's ballistic missile and nuclear programs and the military exercises by the United States and South Korea. Haley has dismissed the suggestion as "insulting."