Indian diplomat R Madhu Sudan said the Black Sea Grain deal had provided a glimmer of hope for peace in Ukraine and helped contribute to lowering the prices of wheat and other commodities. 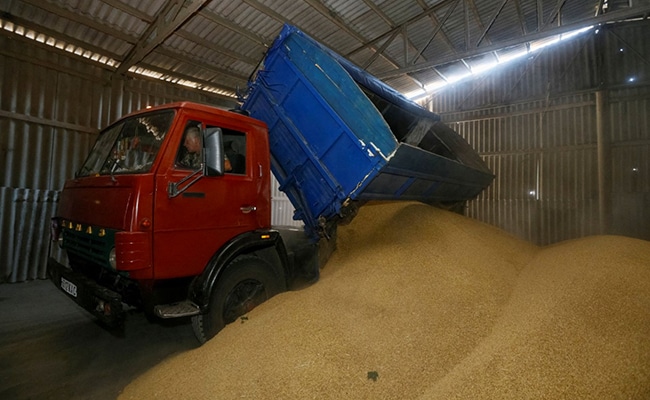 The Black Sea Grain Initiative was signed in Istanbul in July. (Representational)

India raised concern on Monday at the Security Council about the suspension of the UN-brokered Black Sea Grain initiative, saying that this move is likely to further exacerbate the food security, fuel, and fertilizer supply challenges faced by the world.

Indian diplomat R Madhu Sudan said the Black Sea Grain deal had provided a glimmer of hope for peace in Ukraine and helped contribute to lowering the prices of wheat and other commodities.

"The initiative had resulted in export of more than nine million tonnes of grains and other food products out of Ukraine. We believe the exports had contributed to lowering prices of wheat and other commodities, evident from the drop in the FAO Food Price Index," said Madhu Sudan, Counsellor at the Permanent Mission of India to the UN, at the UNSC briefing debate on Ukraine.

"The suspension of the Black Sea Grain initiative is expected to further exacerbate the food security, fuel and fertilizer supply challenges faced by the world, particularly the Global South," he added.

The UN-brokered Black Sea Grain Initiative was signed during a ceremony in Istanbul in July. Under the deal, ships transporting grain from three Ukrainian ports travel along an agreed corridor to markets worldwide.

This UNSC debate comes after Russia requested the meeting following its decision to suspend participation in the Black Sea Grain Initiative "for an unspecified period of time", announced this past weekend, in response to alleged Ukrainian attacks against its ships.

Counsellor Madhu Sudan said India supports the engagement of the Secretary-General with the parties on renewal and full implementation of the initiative, including facilitating of exports of food and fertilizer from Ukraine and Russia.

"The Black Sea Grain initiative and its successful implementation over the last four months is consistent with India's long-standing position that diplomacy and dialogue is the only solution to end this ongoing conflict that has resulted in serious consequences for the region and beyond," he said while adding that India continues to support all efforts, including that of the Secretary-General, to end the conflict.

On Monday, UN officials told the Security Council the landmark agreement to export grain and related foodstuffs from Ukraine must be kept alive amid the ongoing war and the global cost of living crisis.

"Ukraine's grain exports are not a food aid operation. They do operate as a huge lever on price, with positive ripple effects throughout the world. New security allegations are a cause of grave concern to the Secretary-General and many Member States are worried now that the deal is in trouble," said UN's Emergency Relief Coordinator, Martin Griffiths.

According to UN News, Ukraine and Russia account for roughly 30 per cent of the world's exported wheat and barley, one-fifth of its maize, and over half of its sunflower oil. Russia is also the world's largest exporter of fertilizers, accounting for 15 per cent of global exports.