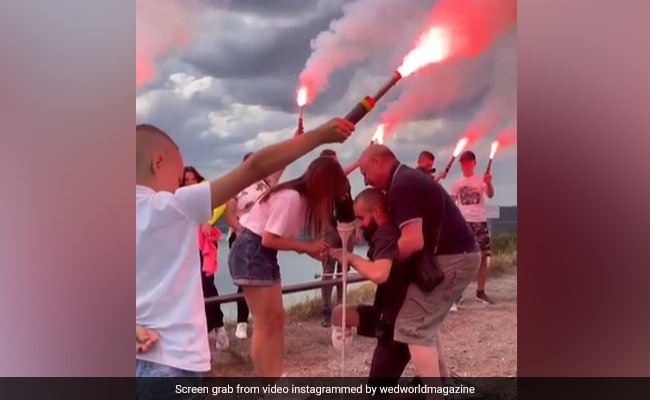 Clip of a specially-abled Ukrainian defender proposing to his girlfriend has gone viral online.

At a time when Ukraine has become the focus of dismal news and heartbreaking images, a beautiful video from the country has surfaced, brightening people's days. In this video, a Ukrainian defender with special abilities asks his girlfriend to marry him. It first gained popularity after being shared on the Instagram page of WedWorld Magazine.

"She said yes. Ukrainian defender came from the frontline and made a marriage proposal to his girlfriend," reads the caption of the post.

The woman was blindfolded, and a guy helped the Ukrainian defender get down on one knee. He then took out the ring and made the most romantic proposal to his girlfriend. Everyone in the vicinity rejoiced loudly when the pair kissed.

When the video was shared online, it received an astounding 20.9 million views. Simply thrilled, online users poured their affection into the comments area.

"One of the most beautiful proposals i have ever seen!!!," a user wrote.

"Everyone understood the assignment. This is so beautiful," wrote one user, while another commented, "Amazing and gracefully... Congratulations to the lovely couple Many blessings to you both with the grace of God".

Wishing the couple well, one person said, "Heaven help you and bless you … no country should endure your pain."

However, Russia's February 24 invasion of Ukraine has left tens of thousands dead, displaced millions, and sown economic strife across the world.

Most of those killed or injured were the victims of explosive weapons such as artillery, missiles, and air strikes, the United Nations High Commissioner for Human Rights (OHCHR) said.

Moscow calls its campaign a "special military operation" to demilitarise Ukraine and protect Russian-speaking communities. The Ukrainian president, Zelensky, said Russia had "embarked on a path of evil."

Where Did Earth's Oxygen Come From? Scientists Hint At An Unexpected Source