Hammond said Britain should work closely with the bloc to prioritise jobs and prosperity when Brexit talks start next week. 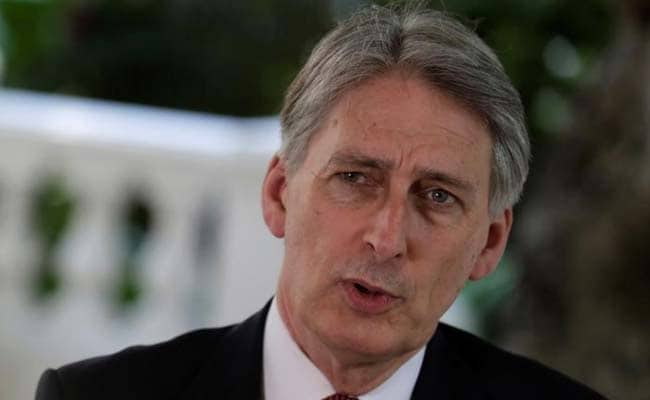 British finance minister Philip Hammond said Britain should adopt a pragmatic approach to Brexit negotiations which begin on Monday, striking a different tone to Prime Minister Theresa May who has threatened to leave the EU without a deal if necessary.

The debate within Britain's government about how to quit the European Union has been blown wide open by an election that left May without a majority in parliament and damaged her authority in the ruling Conservative Party.

Hammond, speaking to reporters before a meeting of the 28 EU finance ministers on Friday, said Britain should work closely with the bloc to prioritise jobs and prosperity when Brexit talks start next week.

"As we enter negotiations next week we will do so in a spirit of sincere cooperation taking a pragmatic approach to trying to find a solution that works both for the UK and for the European Union 27," he said.

The comments added to signs that Hammond is trying to revive his calls for a business-friendly Brexit.

In contrast to May's uncompromising tone with its focus on controlling immigration, Hammond has long stressed the importance of ensuring that British employers can continue to find the skilled workers they need from the EU.

Britain's giant banking industry and other business groups see Hammond as their most powerful ally in government and they were worried when it appeared he might lose his job in the run-up to the election.

But May, weakened by her election flop, opted to keep Hammond in his job along with other key ministers.

The chancellor of the exchequer was asked whether he favoured a softer version of Brexit - such as British membership of the EU single market or of a customs union.

Hammond said Britain's position had been set out in a speech by May in January and a letter she sent to EU leaders in March when she triggered the Brexit process. May has said Britain will leave both the single market and the customs union.

"My clear view, and I believe the view of the majority of people in Britain, is that we should prioritise protecting jobs, protecting economic growth, protecting prosperity as we enter those negotiations and take them forward," he said.

The Daily Telegraph, quoting senior government sources, said Hammond wanted to pursue a deal under which Britain would become an associate member of the EU's customs union but would also have the freedom to negotiate separate trade agreements with other countries for its huge services industries.

British negotiators believe the EU might accept such a deal because it would mean Europe's trade in goods with the UK - in which the EU runs a surplus - would not be disrupted by Brexit, the newspaper said.

A spokeswoman for Hammond did not immediately respond to a request for a comment on the report.

Hammond had been due to spell out his views on Brexit in a speech on Thursday, but it was cancelled following a deadly tower block fire in London on Wednesday. He is expected to deliver it in the coming days.

The Sun newspaper reported this week that Hammond had won the backing of interior minister Amber Rudd on the need to focus on the economy in Brexit. Two former Conservative prime ministers have also urged May to soften her approach.

Promoted
Listen to the latest songs, only on JioSaavn.com
In a sign that Britain was sticking to its guns on some of the key points in negotiations with the EU, the Brexit minister said on Friday no deal could be struck on exiting the EU unless the future relationship with the bloc was taken into account alongside the withdrawal terms.
© Thomson Reuters 2017