The 44-year-old MP will be absent from parliament while he takes part in the latest series of ITV's "I'm A Celebrity... Get Me Out Of Here!" 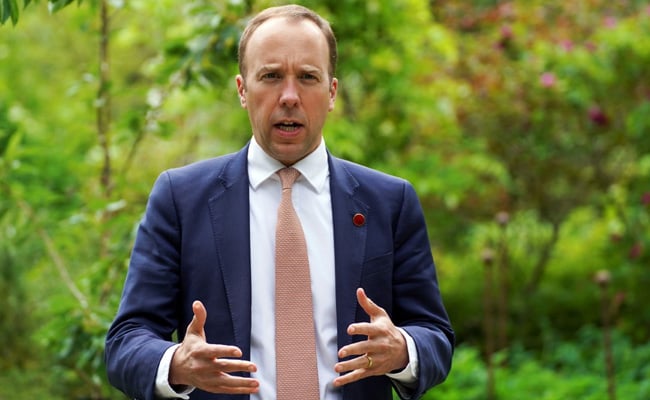 Matt Hancock was an ever-present public figure in Britain during the pandemic. (File)

The 44-year-old MP will be absent from parliament while he takes part in the latest series of ITV's "I'm A Celebrity... Get Me Out Of Here!"

The show takes a group of household names -- some better known than others -- to a rainforest in Australia, pitting them against the elements and challenges involving snakes and other creepy-crawlies.

One previous contestant was Hancock's Tory colleague, former culture minister Nadine Dorries, who was forced to eat an ostrich's anus on the show in 2012.

Dorries was criticised at the time for not seeking permission to go on the programme and was also suspended. She was the first contestant voted off that season.

Conservative chief whip Simon Hart, who is in charge of party discipline, followed a similar course on learning of Hancock's involvement.

"I have considered the situation and believe this is a matter serious enough to warrant suspension of the whip with immediate effect," he added.

"The prime minister believes that at a challenging time for the country, MPs should be working hard for their constituents," the spokesman said. Sunak was "unlikely" to watch, he added.

One of Hancock's supporters defended his involvement, saying the programme would help connect to the "politically disengaged" and show "the human side" of politicians.

Celebrities on the show this year include England World Cup rugby winner Mike Tindall, whose wife Zara is an Olympic showjumping medallist and a niece of King Charles III.

The most high-profile is Boy George, the Culture Club singer and DJ who has reportedly signed a deal with producers not to eat any meat as he is vegan.

Hancock was an ever-present public figure in Britain during the coronavirus pandemic but was forced to step down after breaching social distancing rules.

He was captured on leaked security camera footage at work in a steamy clinch with his advisor and former university friend, Gina Coladangelo.

He subsequently left his wife and has been reportedly angling for a political comeback.

Hancock's book, "Pandemic Diaries. The Inside Story of Britain's Battle Against Covid", is due to be published in December.