Northern Ireland is torn between staying with the UK or uniting with Ireland. 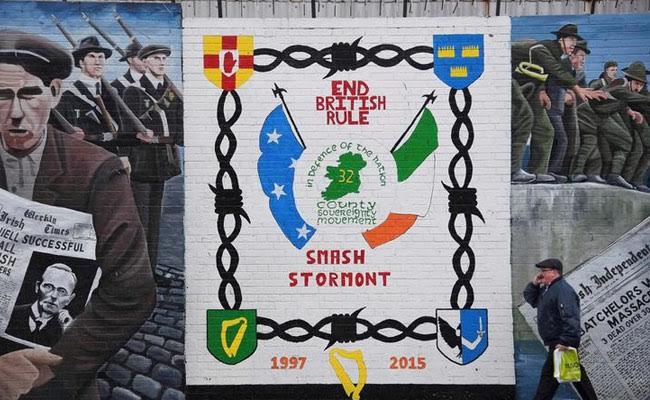 Belfast: Political leaders in Northern Ireland are casting next week's British election as a referendum on whether voters want to be part of the United Kingdom or neighbouring Ireland.

Britain's vote to leave the European Union has raised the stakes in the long and divisive dispute over Northern Ireland's status. Concerns that Brexit will lead to a hard border with EU member Ireland have reinvigorated Irish nationalism and its dream of a united Ireland free of British influence.

That in turn has unsettled unionists, who back British rule and fear their majority is slipping away in the region of 1.8 million people.

For some people in both communities, the idea of a new, rigid frontier with Ireland stirs painful memories of the British Army watchtowers and checkpoints that peppered the border during decades of sectarian violence that killed thousands.

"The stakes could not be higher for unionism and for Northern Ireland," outgoing First Minister Arlene Foster said at the launch of her Democratic Unionist Party's (DUP) election campaign last month.

"A general election ... is inevitably a referendum on Northern Ireland's place in the UK," she said, tapping into anxiety among mainly Protestant unionists about becoming a vulnerable minority in a predominantly Catholic united Ireland.

The election "will be seen in many ways as a barometer on Irish unity", Gerry Adams, president of the nationalist Sinn Fein party - the former political wing of the Irish Republican Army (IRA) - told a rally last week.

Next Thursday's election will see British voters elect 650 lawmakers to the parliament in London. The battle between Prime Minister Theresa May's Conservatives and Jeremy Corbyn's opposition Labour might dominate proceedings nationally - but not in Northern Ireland. The Conservatives have no chance of winning a seat in the region and Labour does not contest elections there because of its historic alliance with nationalist party the SDLP.

Instead the vast majority of Northern Irish voters will choose between nationalist and unionist parties, often represented by posters marked with Irish tricolours or British Union Jack flags.

The struggle between nationalists and unionists over whether Northern Ireland should unite with Ireland or remain part of the United Kingdom plunged the region into 30 years of violence from the late 1960s which saw 3,600 people killed.

A 1998 peace deal created a power-sharing government that has brought peace and relative prosperity, but has failed to heal the sectarian divide that still defines politics here.

While no one expects a return to the violence of Northern Ireland's "Troubles", sectarian tensions intermittingly erupt into rioting.

While Sinn Fein refuses to take seats in the British parliament, the DUP could have significant influence if May's Conservatives have a bad day and need the votes of their traditional allies.

As important as the seat count for Northern Ireland politics will be the relative strength of the total nationalist and unionist parties vote. Nationalists will be hoping to narrow the gap between the 280,000 who voted for their parties at the last Westminster election and the 360,000 who supported unionists.

"It's just a numbers game," said Alex Kane, a columnist for Northern Ireland's largest unionist newspaper, the Belfast Telegraph. "Nothing else matters."

A surge in the Irish nationalist vote in a regional poll in March - the first election since last June's Brexit vote - dramatically demonstrated how the referendum changed the political calculus in Northern Ireland.

While the DUP edged Sinn Fein, its advantage shrank from 36,000 to 1,200 votes and from 10 seats to one in the 90-seat assembly. Unionists were stunned to lose their majority in the regional parliament for the first time since Ireland was partitioned in 1921.

For the nationalists, it showed that the day when demographic trends allow them to eclipse unionists may come much sooner than expected and bolstered demands for a referendum on uniting with Ireland allowed under the 1998 peace deal.

"They (Sinn Fein) have a moment to push the unity which they never thought would come," Kane said.

Polls in the past have shown a strong majority in favour of remaining with Britain, but Brexit has upended many of the basic assumptions of Northern Ireland politics.

"While we can say the union is safe now we can't rest on our laurels and say it will always be stable and safe," said Doug Beattie, a candidate for the second largest unionist party, the Ulster Unionists, in the Upper Bann constituency.

For many unionists the March poll was a wake-up call and some voters said they planned to rally behind unionists parties to stop that from happening.

"It scared people," said Henry McLaughlin, 80, a retired builder who will reluctantly vote for the DUP due to fears that Sinn Fein's political momentum might force unionists into a united Ireland against their will.

"My brother-in-law, he's 83 and he's never voted and he's voting for the first time because he's scared."

On the other side, several nationalist voters in Belfast said Brexit and the prospect of a hard border with Ireland had encouraged them to drop misgivings about Sinn Fein's former links to the IRA, blamed for around half of the deaths during the "Troubles".

"I'm not 100 percent behind them," said Sinn Fein voter Elizabeth Boyle, a financial administrator in her 40s, who said like many of her friends she was worked up about Brexit. "But if you don't go for them the DUP are going to get in."

The election may hinder efforts to secure agreement between Sinn Fein and the DUP to form a new regional government and avoid the first return to direct rule from London in a decade.

The likely political stalemate comes at the same time as Britain's exit from the European Union threatens shockwaves to its economy, constitutional status and border with Ireland.

"It will be deep freeze," Brian Feeney, a Belfast-based historian and political commentator said of efforts to form a new regional administration. "There will be no movement."

(This story has not been edited by NDTV staff and is auto-generated from a syndicated feed.)
Comments
Northern IrelandIrelandUK Snap Electionsukelection2017stories