Two killed in clashes between Egyptian police and protesters 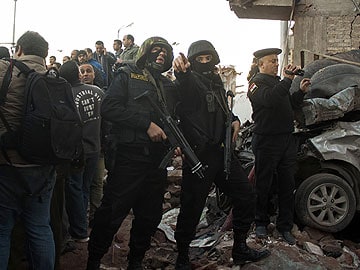 Egyptian security forces and others gather at the scene of a powerful explosion. (File pic)

Cairo: Two people were killed in violent clashes that erupted late on Wednesday between pro-Islamist protesters and police in Egypt's coastal city of Alexandria, the Ministry of Interior said.

Egypt has been hit by a wave of violent protests since the army removed elected Islamist President Mohamed Morsi from office in July following mass protests against his rule. Hundreds have been killed and thousands arrested since then.

The Interior Ministry said the clashes happened during two marches organised by some 200 Brotherhood members in Alexandria.

"They (the Brotherhood protesters) blocked the road... set shops on fire, burned a citizen's car, fired guns and bird shot and clashed with and terrorised the people," the Ministry of Interior said in a statement on Thursday.

It said some residents had exchanged fire with the Brotherhood protesters, killing two people and injured three police officers. The police forces managed to end the clashes and arrested 10, according to the Interior Ministry statement.

The police had earlier on Wednesday fired tear gas and water cannons at hundreds of pro-Morsi protesters demonstrating near the Defence Ministry in Cairo after they blocked a road and chanted anti-police and army slogans, according to state media reports.

Students supporting Morsi have been staging daily protests inside and outside their universities since the start of a new academic year in September. At least 10 students have been killed during clashes with the police.

Last November, Egypt's army-installed interim government issued a law that banned protests near or originating from places of worship and made it compulsory to seek Interior Ministry permission to hold a demonstration.

Since the law was passed, hundreds of Brotherhood protesters and liberal activists have been arrested for demonstrating without permission.

In the southern city of Beni Suef, an activist in the leftist Popular Current group was arrested and security forces confiscated his laptop computer, the movement said in a statement, identifying him as Mohamed Mostafa.

A police source said he was detained for posting anti-army and police comments on Facebook.

Since Morsi's removal, which opened the bloodiest chapter in Egypt's modern history, security forces have killed hundreds and arrested thousands of his supporters.

Some 400 soldiers and policemen also have been killed, many in attacks by Islamist militants in the Sinai Peninsula, bordering Israel and the Palestinian Gaza Strip.

On Monday, the United States expressed concern about Egypt's designation of the Brotherhood as a terrorist group, as well as the ongoing detentions and arrests by security forces.

Promoted
Listen to the latest songs, only on JioSaavn.com
"We remain deeply concerned about all of the politically motivated arrests, detentions, and charges in Egypt. These actions raise questions about the rule of law being applied impartially and equitably, and do not move Egypt's transition forward," U.S. State Department spokeswoman Marie Harf said in Washington.

Morsi and most of the Brotherhood's top leaders are on trial on a group of charges ranging from inciting violence against protesters to cooperating with foreign organisation to execute terrorist acts in Egypt.
© Thomson Reuters 2014