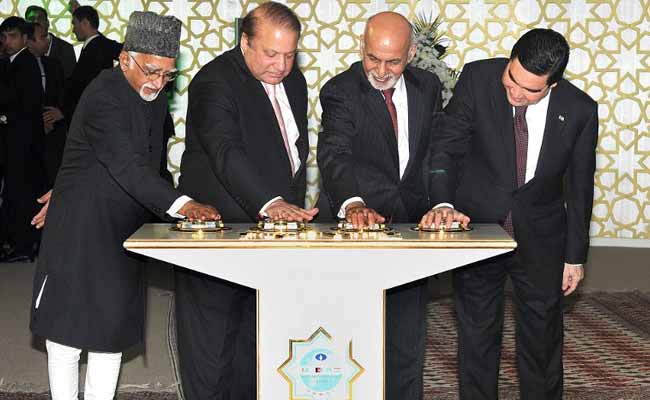 Mary, Turkmenistan: Turkmenistan on Sunday started work on its part of a natural gas pipeline to Afghanistan, Pakistan and India (TAPI), a $10 billion project designed to reduce its dependence on gas sales to Russia and China.

The ground-breaking ceremony took place near the city of Mary in the southeastern part of the central Asian country, close to the giant Galkynysh gas field which is meant to provide gas for the 1,814-kilometre (1,127-mile) link.

"By December 2019, the pipeline will be completed. It will have a capacity of 33 billion cubic metres," Turkmen President Kurbanguly Berdymukhamedov said at the ceremony also attended by Afghan President Ashraf Ghani, Pakistan Prime Minister Nawaz Sharif and Indian Vice President Hamid Ansari.

Although it is backed by hydrocarbon resources, the TAPI project faces several risks, such as the deteriorating security situation in Afghanistan and lack of clarity about its financing.

TAPI's construction is led by state gas firm Turkmengas and none of global energy majors have so far committed to the project that will cost as much as a third of Turkmenistan's total 2016 budget.

The only company known to be in talks on TAPI currently is Dubai-based Dragon Oil which produces oil off Turkmenistan's Caspian coast. Gazprom was also looking to join the project in the past.

The Turkmen government also said on Sunday it had signed a "framework agreement" with a consortium of Japanese and Turkish companies to implement the third stage of expansion at Galkynysh that will boost the field's output to 95 billion cubic metres (bcm) a year.

The consortium includes JGC Corporation, Mitsubishi, Itochu, Chiyoda and Sojitz of Japan as well as Calik Group of Companies and Ronesans Endustri Tesisleri of Turkey.

The government did not disclose any other details such as the cost of expansion.

Galkynysh already supplies gas for a pipeline to China, the main buyer of Turkmen gas, which imports between 30 and 35 bcm per year. Russia, once Ashgabat's main customer, bought just 11 bcm of Turkmen gas in 2014 and will slash imports of the fuel to 4 bcm this year.

Russia's state gas company Gazprom, the world's biggest gas producer, is also preparing to start shipping gas to China via a pipeline, which is expected to start by the end of this decade.
© Thomson Reuters 2015