Specially designed for the new facility, the wheeled robots are a first for Turkish airports, according to an airport-produced video introducing the machines to the public. 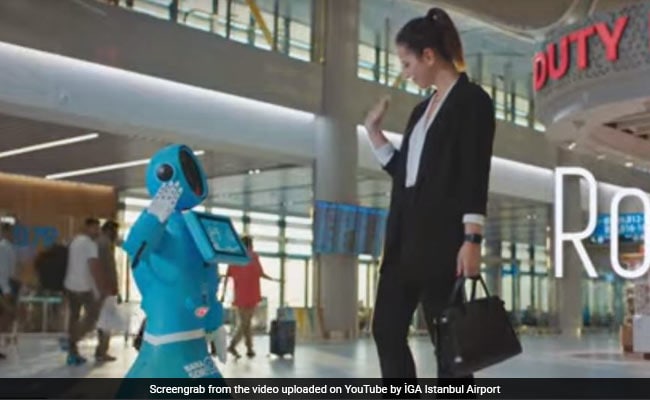 About the size of a small child, the eggshell-blue machines have bright digital faces

Earlier this year, thousands of flights began landing at Istanbul's brand-new $11 billion airport, a sprawling behemoth that occupies an area larger than Manhattan and may eventually become the world's busiest air hub.

How do you help millions of harried passengers each year navigate an 818 million-square-foot facility with five concourses and 143 boarding gates.

One answer, according to airport officials, is a fleet of humanoid robots.

Specially designed for the new facility, the wheeled robots are a first for Turkish airports, according to an airport-produced video introducing the machines to the public. About the size of a small child, the eggshell-blue machines have bright digital faces with cartoonish round eyes and an ever-present smile that appears designed to put people at ease.

When the robots speak, their mouths flash, their eyes wink and the machine's arms move up and down. A touch screen attached to the robot's chest allows customers to interact with the machine.

Meet one of the most technologically advanced airport in the world, Istanbul Airport.

"My capabilities include route showing, giving directions, inquiring about flight schedule and flight information status," the robot says between videos of the machine assisting customers and spinning in circles. "I am looking forward to meeting new passengers at Istanbul Airport every day."

The Istanbul Airport video doesn't reveal whether the machines have a name or how many will roam the concourse, but Business Traveller reported that there are four robots on hand.

At a time when airports and the number of people passing through them continue to grow, the robots are an effort to make travel more manageable. When completed, Istanbul's airport - 20 miles outside the city on the Black Sea coast - will be able to transport as many as 200 million passengers a year. For perspective, Hartsfield-Jackson International Airport in Atlanta, currently considered the world's busiest, processes about half that number.

"We're starting to arrive at scales which were previously unimaginable for the size of these airport buildings," Andrew Thomas, a partner at the architectural firm Grimshaw, which designed the Istanbul airport, told the New York Times last year. "It almost doesn't matter what you put in it if the walks are so long that people are exhausted by the time they get to their gate."

Istanbul's airport robots may be innovative and on trend, but they're not exactly groundbreaking.

Perhaps you've heard of Pepper, for example. In addition to being spotted eerily tapping a drum while performing Buddhist funeral rites in Japan, the doe-eyed humanoid robot has also been interacting with British passengers at a railway station in central London (including posing for selfies). Pepper recently emerged at an airline in Taiwan, as well, it's shiny crown strikingly bald yet cheerful.

At one of France's busiest airports, self-driving robotic valets named Stan have been parking travelers' vehicles for months, a process the company claims is far more efficient than human drivers.

Humanoid robots on wheels with digital expressions have popped up in other busy, high-stress locations, such as hospitals.

When officials at Mongkutwattana General Hospital in Bangkok needed help moving mountains of paperwork earlier this year, they turned to a fleet of humanoid robots, which they outfitted in bright yellow dresses and shoulder-length brown wigs.

Adding an element of the supernatural, the unsmiling Chinese-made machines also have two blazing red eyes - each one massive and ghoulish - that glare from behind a darkened pane of transparent plastic like a demonic predator lurking in the dark.

Their names: Nan, Nee and Nim.