"Trust Me": UK Nurse Asked Mother To Leave, Then Murdered Her Baby Son

A lawyer said the nurse made "fraudulent" nursing notes after the event in an attempt to cover her tracks. 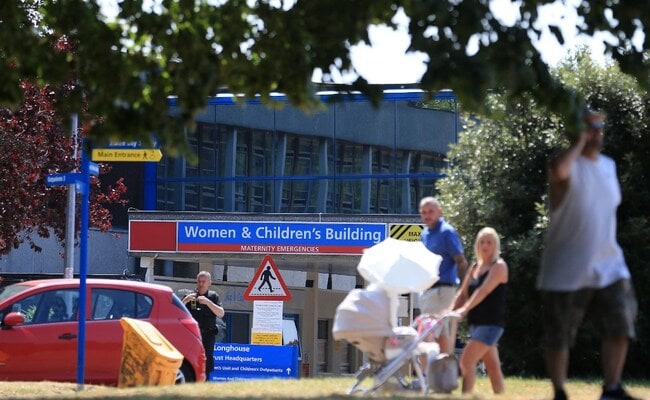 The UK nurse is accused of murdering seven babies. (File)

A nurse accused of murdering seven babies at the UK hospital where she worked was disturbed by the mother of one of her victims as she tried to kill him, a court heard on Tuesday.

The woman arrived in the neo-natal unit of the Countess of Chester Hospital in Chester, northwest England, on the evening of August 4, 2015, to find her son "distressed" and bleeding from the mouth.

The young boy died the following day, allegedly by an injection of air into the bloodstream.

Johnson told a jury that the unwitting mother was "fobbed off" by Letby, 32, who has pleaded not guilty to the murder charges, and attempting to kill 10 other babies, including some more than once.

The lawyer said Letby, originally from Hereford in western England, made "fraudulent" nursing notes after the event in an attempt to cover her tracks.

She also searched social media for the family of the boy, referred to in court as "Child E" in the days and months afterwards, including on Christmas Day.

Hours after "Child E" died on August 5, 2015, Letby allegedly tried to kill his twin brother "Child F" by injecting insulin into a bag of feeding fluids.

Johnson said negligence had been ruled out, as no other baby on the ward had been prescribed insulin and Letby hung up the bag and was in the room at the time the boy was poisoned.

"The only credible candidate" to be the poisoner was Letby, he said, "the same person who was present at all the unexplained collapses and deaths at the Countess of Chester Hospital on the neo-natal unit."

The court was told that the first victim -- "Child A" -- was born prematurely and just one day old when he died on June 8, 2015, again following an injection of air into the bloodstream.

His twin sister -- "Child B" -- survived an attempt hours later, while "Child C" -- a five-day-old baby boy -- was killed six days later when air was injected into his stomach.

Letby was on shift on all three occasions.

The prosecution said Letby sent messages to friends afterwards, explaining that the cases could be explained by natural causes.

She also again searched Facebook for the child's parents.

In September that year, Letby allegedly tried three times to kill a baby girl who had been born four months previously weighing just over 500 grams (1.1 pounds).

The prosecution said the baby -- referred to as "Child G" -- was fed excessive amounts of milk and probably injected with air, causing her to vomit.

On the third occasion, she stopped breathing.

But Johnson said a monitor to measure oxygen saturation levels and heart rate levels had been switched off and Letby, who had "discovered" the unresponsive child, was trying to revive her.

The child had been left "severely disabled", he added.

Johnson said all the deaths and collapses were "not naturally occurring or random events".

"They were deliberate attempts to kill using slightly different methods by which Lucy Letby sought to give the appearance of chance events," he added.