Trump decided a plan in Congress to enhance the powers of the so-called Committee on Foreign Investment in the United States (CFIUS) was "the best approach to protect critical technology." 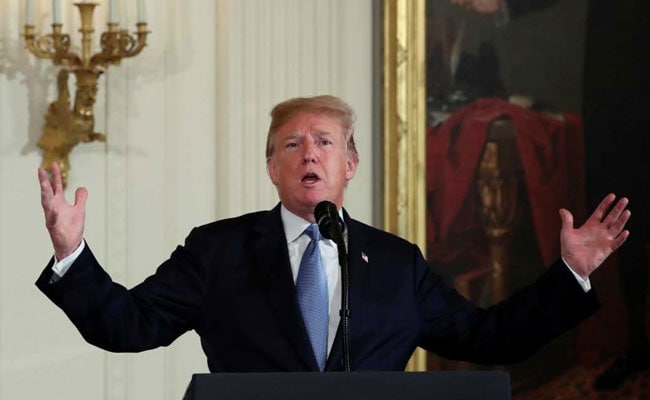 Trump didn't single out China, supported broader measures that would apply to any country (File)

US President Donald Trump on Wednesday said he supported tougher restrictions on foreign investment in sensitive technology, as well as export controls on those goods, but he stopped short of imposing specific restrictions on China.

Following a report that raised "very serious issues" on China's trade and investment practices, Trump decided a plan in Congress to enhance the powers of the so-called Committee on Foreign Investment in the United States (CFIUS) was "the best approach to protect critical technology."

In a statement, Trump said that if Congress fails to pass strong enough legislation to protect "the crown jewels of American technology and intellectual property" then he will take further action.

After a year-long investigation into China's trade policies, the White House on May 29 said it planned to announce "specific investment restrictions and enhanced export controls" by June 30 targeting China's efforts to acquire "industrially significant technology."

However, Trump backed away from singling out China and instead supported broader measures that would apply to any country.

The House of Representatives and the Senate have each approved a bill to boost the authority of CFIUS, an interagency body that reviews potential foreign investment, to broaden the types of deals subject to oversight.

Now the two chambers will have to reconcile them into a single bill for Trump to sign.

China on Thursday said it was closely following the bill and that countries should be liberalizing policies to attract investment.

"We do not support tightening foreign investment requirements on the grounds of national security," said commerce ministry spokesman Gao Feng.

Clamping down on investment

Even the hint of a possible CFIUS review can kill a potential investment and the committee has blocked Chinese investment in semiconductors and targeted Russian nuclear investment. Analysts worry the talk of tighter oversight will discourage investment that benefits the US economy.

According to the Rhodium Group, a research firm, Chinese investment in the United States fell 35 percent in 2017 from the record $45.6 billion in 2016, and has slowed to a trickle, just $1.4 billion in the first quarter of this year.

Gao noted Chinese companies have concerns about the stability of policies in the US.

"Capital votes with its feet," Gao told a press briefing.

The White House may have been prompted to step back from tough restrictions on China after stock markets dropped sharply and as experts warned that strong action against Beijing could open US firms up to severe retaliation.

Industry officials and trade experts applauded the decision to refrain from going after China specifically.

"It is a welcome surprise given the other signals" from the administration, said Jake Colvin, vice president of the National Foreign Trade Council.

The CFIUS reform in Congress "was the result of extensive process of stakeholder engagement," Colvin told AFP. So allowing the legislative effort to continue is the "proper path to focus on right now, rather than specific China restrictions."

Not going soft on China

"For those who want to say it's us being weak on China, the answer is no," he said.

And analysts pointed to comments from White House economic advisor Larry Kudlow warning that tougher action on China was still being contemplated.

"The president is unsatisfied with their response on trade talks and so he put out there the possibility of additional tariffs," Kudlow told reporters. "The ball is in their court."

Trump's trade measures were prompted by US complaints over Chinese policies that Washington said either forced companies to relinquish key technology or allowed China to steal it outright.

Trump announced 25 percent import tariffs on hundreds of Chinese products to pressure the country to alter its practices. Those tariffs are due to take effect July 6.

US officials have highlighted Beijing's "Made in China 2025" industrial development plan as a source of concern, since they say it is a map for dominating significant high-tech industries from space to telecommunications, robotics, and electric cars.

After days of declines and increased volatility amid fears of a worsening trade war, US stocks rallied early in the session but reversed course around midday to close with sharp declines once again, despite the more optimistic sentiment in European markets, which closed higher.