Local authorities are asking people to stay away from the ceremonies to lessen the chances of unrest -- and of the swearing-in turning into a Covid-19 superspreader event. 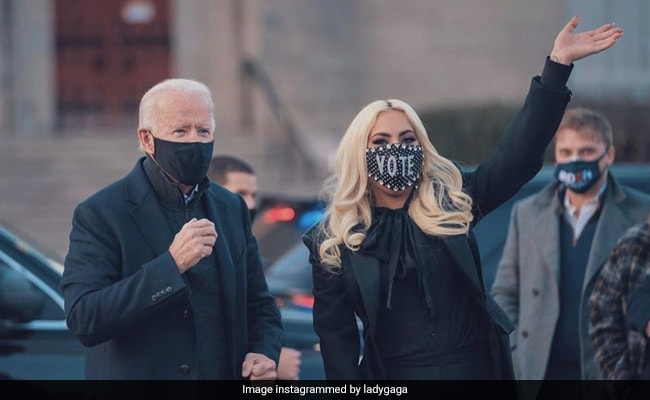 Gaga and Lopez will perform during the ceremony, held on the steps of Capitol building. (File)

Pop superstar Lady Gaga will sing the national anthem during Joe Biden's swearing-in as US president on January 20, with Jennifer Lopez also performing at the largely virtual event, it was announced Thursday.

The two music icons will headline an inauguration like no other, with security stepped up in Washington against threats by extremist supporters of outgoing President Donald Trump after they attacked the US Capitol last week in a bid to overturn the results of the election.

Local authorities are asking people to stay away from the ceremonies to lessen the chances of unrest -- and of the swearing-in turning into a Covid-19 superspreader event.

Instead, Biden's inaugural committee said that it will broadcast five days of programming under the theme "America United" which "will honor inaugural traditions while safely allowing more Americans than ever before to participate from their own homes."

In place of the hundreds of thousands of people who usually crowd the National Mall for the inauguration, the committee will install a "Field of Flags" which it said will "represent the American people who are unable to travel."

Scene of the attack

The 90-minute "Celebrating America" inauguration show will be hosted by Tom Hanks and feature more musical performances, from Jon Bon Jovi, Justin Timberlake and Demi Lovato, and will be broadcast on all major US networks, US media reported.

Gaga and Lopez will perform during the ceremony itself, held on the steps of the Capitol building, which still bears the scars of the January 6 attack.

Gaga has been a vocal supporter of Biden, appearing at his campaign finale in Pittsburgh in November; while Lopez has been outspoken in recent months about Covid-19 relief efforts.

Some 20,000 National Guard soldiers are expected in Washington for Biden's inauguration. The capital is already under heavy security, with much of downtown fenced off and under guard.

Washington Mayor Muriel Bowser has asked visitors to stay home due to the raging pandemic, and Airbnb has banned bookings in the capital around the time of the inauguration.

Trump -- who on Wednesday became the first president to be impeached for a second time for inciting the Capitol "insurrection" -- had to settle for less well-known artists in 2017 due to his unpopularity in the entertainment world. Country singer Toby Keith headlined the event.

The outgoing president, who claims the election was rigged to deny him victory, will not attend the inauguration.