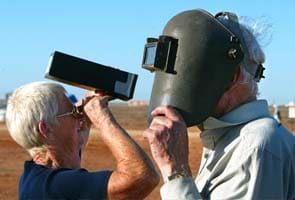 Sydney: Tens of thousands of people were flocking to Australia's tropical north on Monday to watch a rare total solar eclipse, a phenomenon officials say has not been seen in the region in 1,300 years.

The Queensland state government expects up to 60,000 visitors will witness on Wednesday the alignment of the sun, moon and earth which creates one of the most spectacular sights in nature, essentially turning day into night.

Northern Australia is the only place where crowds will be able to view the eclipse, which will mainly take place over the vast South Pacific.

"This one is a bit unique because we are not going to have another eclipse in Australia for years," said Journeys Worldwide managing director Dick Cijffers, who runs specialist eclipse tours.

The eclipse starts at sunrise in the Northern Territory east of Darwin and passes across Australia's top eastern cape before heading out over the South Pacific towards the north of New Zealand.

From sunrise on Wednesday (2035 GMT Tuesday) the moon will begin to cross in front of the sun, gradually passing over it until it is completely covered, bringing with it a shadow path.

The whole process will take several hours, with the skies in the path gradually darkening and lightening again, but the maximum duration for the total eclipse on the Australian mainland will be two minutes and five seconds.

The best place to view the eclipse will be between Cairns and Port Douglas, tourism hotspots close to the Great Barrier Reef and the Daintree rain forest.

Tourism operators say everything from camping grounds to five-star hotels have been booked up, with other eclipse watchers set to view the event from hot air balloons or boats moored on the centre line of the eclipse.

"Cairns is pretty much full, it's hard to find accommodation at the moment," said a spokesman for Tourism Tropical North Queensland, adding that there had been keen interest from the United States, Japan and Germany.

For those positioned outside a roughly 150-kilometre (95-mile)-wide central path but who are still partly in the moon's shadow, the eclipse is partial -- it will look as though a bite has been taken out of the sun.

A partial eclipse will be visible in Papua New Guinea, the extreme eastern part of Indonesia, eastern Australia, New Zealand, Polynesia, part of Antarctica and the southern part of Chile and Argentina.
Comments
solar eclipse