Protesters are demanding an immediate end to Trump's "zero tolerance" policy and the return of more than 2,500 children separated from their families at the border. 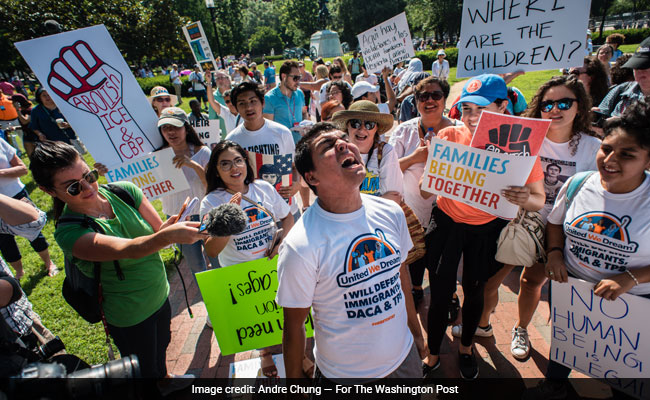 The rally began with drums and a reminder that the story of most Americans began somewhere else.

A representative of the Piscataway Indian Nation addressed a crowd of hundreds assembled in Lafayette Square on Saturday in Spanish, then English. He burned tobacco, an Indian prayer tradition, said a prayer and then sang a indigenous-language song from Bolivia that means, "take courage."

As people continued to file into Lafayette Square, holding signs and wearing the white requested of organizers, it seemed the protest would be smaller than initial estimates of as many as 50,000 in Washington.

The crowd in the overflow space was sparse. People who arrived expecting to be too late to secure a spot near the stage began walking closer, toward Lafayette Square.

Among the protesters were many immigrants - some whose families came long ago, and others much more recently arrived. Those near the stage cheered loudly and shouted "Bienvenidos," or "Welcome," as one of the latter, a woman named Jocelyn, took the microphone.

Jocelyn, who did not give her last name, entered the U.S. with her son in August of last year. That's when it happened to her, she said: The two were separated.

Held in a detention facility in Texas, Jocelyn she didn't know where her child was for the first two months, she said. Authorities at the facility told her he could be relinquished for adoption, she said, as audible gasps came from the crowd.

"I spent many days sick and without hope," she said in Spanish. "I wanted to join this fight to get my son back and for all the mothers who are suffering so far away from their children."

It took nine months to be reunited with her son, she said, during which time she entered a lawsuit as a plaintiff with the American Civil Liberties Union.

Protesters had begun gathering around 9 a.m. Saturday, in anticipation of large crowds and a long day ahead: a two-hour rally starting at 11 a.m. followed by a march to the Department of Justice. About 750 similar "Families Belong Together" protests have been planned throughout the country in every state, from big cities such as New York and Los Angeles to tiny ones such as Antler, North Dakota, population 28. 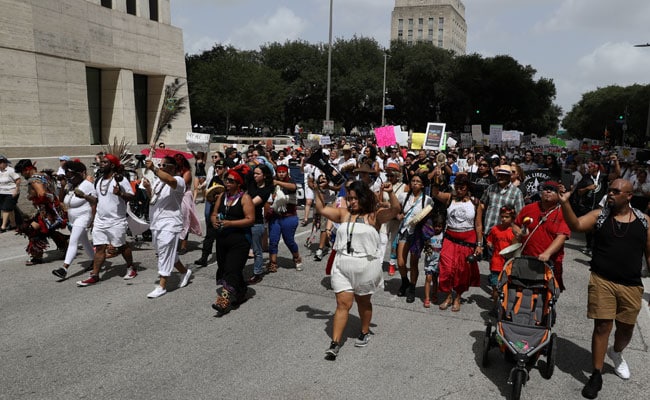 Thousands rally as protest of Trump's immigration policy kicks off in Washington.

Several speakers, including Lin-Manuel Miranda, the creator of the musical "Hamilton," and actors America Ferrera and Diane Guerrero, are expected to take the stage. People who have lived through the Holocaust, Japanese internment camps and Trump's family separation policy also are expected to speak.

"We have three main demands," said Anna Galland, executive director of MoveOn.org, which co-sponsored the event. "Reunite families now, end family internment camps, and end the zero-humanity policy that created this humanitarian crisis and chaos in the first place."

Ellen Sullivan, 63, was among the early arrivals. She took a drag from her cigarette and crushed it beneath her heel as she sat on a park bench Saturday morning in Lafayette Square. Her white shirt read "Mad as Hell," and she held a handmade sign reading "For the least among us."

"This was a tipping point," said Sullivan, a professor who splits her time between McLean, Virginia, and Miami. "It's been a frustrating two years - but there are concentration camps for babies in our country right now, and that's terrifying."

Around 10:30, four students from William and Mary stood in a semi-circle talking, waiting for other members of their student organization, UndocuTribe, to arrive.

Aida Campos, 20, said she's here, in part, for her parents, who came to the United States from El Salvador in the 1980s.

"I try to use my voice as much as I can," said Campos. It's a privilege she has that she feels her parents do not. She first began organizing after the Deferred Action For Childhood Arrivals program (or DACA) was rescinded.

"I see my parents in these people," Campos said.

Rebecca Bermudez grew up in a community with many immigrant families in Fair Lawn, New Jersey. She also comes from a family of Cuban exiles, who were able to legally migrate to America.

"I realized people didn't have the privilege of coming to the country like my parents," Bermudez, 20, said. "It didn't make sense."

A few feet away from the group, a crowd of worshippers from the Unitarian Universalists United for Social Justice huddled together and prayed before marching to the rally.

"Shout it to the White House," a minister said, "Our prayers for sanity and humanity in our politics."

Many families, mothers and children were in attendance on Saturday.

Some children held their own signs, hand-drawn and finger-painted.

Florencia Fuensalida and John Van Zandt, who have both worked for years with immigrants, admitted that they haven't told their 3-year-old son Bastian why they're marching today, but they have practiced chants with him: We respect everybody. We love our friends.

As the family boarded a bus, the boy seemed to have friends everywhere.

A girl holding a sign saying "I respect kids. I am 4," smiled at Bastian, who was wearing a bright red shirt reading "Our dreams are not illegal." A woman who came from Athens, Georgia, with a bag of 50 posters handed his family three to hold. Another pair of women handed them "Return the Children" wristbands, one in Bastian's size and one for his mom.

"Immigrants are coming here to survive," Fuensalida said. "Then they get here and they get ripped of the only thing they have, their families."

Though the rally is taking place just across the street from the White House, Trump was not expected to be there. He was scheduled to spend the weekend at his golf club in Bedminster, New Jersey.

(Except for the headline, this story has not been edited by NDTV staff and is published from a syndicated feed.)
Comments
Trump Immigration PolicyImmigration Protest US